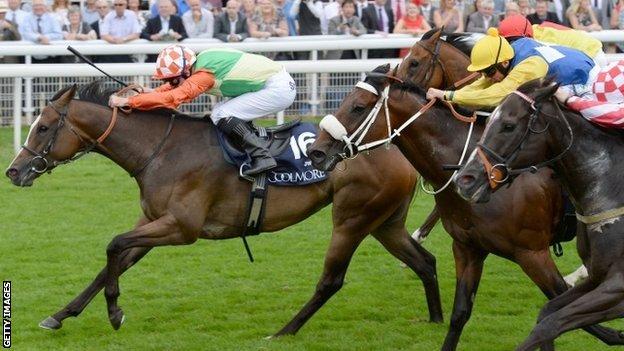 The filly, trained near Newmarket by Robert Cowell, fell to the ground after being squeezed for room by two rivals.

Drowne, who won the Group One Nunthorpe Stakes at York on Jwala in August, suffered a punctured lung and broken collarbone.

Trainer Cowell said he was "devastated" after the death of four-year-old Jwala, who won five races including the Nunthorpe at odds of 40-1.

"Jwala was a special racehorse. I am especially proud to have been part of her life," he said.

In the Hong Kong Mile, European hopefuls Moonlight Cloud and Sky Lantern finished out of the frame as Glorious Days triumphed.

Moonlight Cloud, the winner of six Group One events for French trainer Freddy Head, was sixth and is now set to be retired.

The 1,000 Guineas winner Sky Lantern failed to give retiring trainer Richard Hannon a victorious farewell. She finished last of the 14 runners, but will stay in training as a four-year-old next year with Richard Hannon junior.