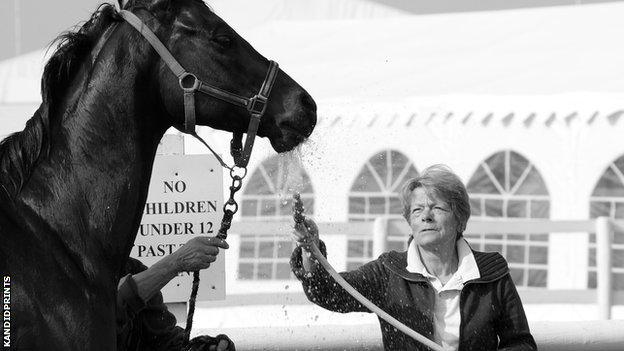 Tributes have been paid to Jersey trainer Joan Le Brocq, who has died at the age of 65 after a short illness.

Le Brocq's first winner came on Boxing Day 1966 and over the decades that followed she trained many of the island's top horses.

"Joan was a great friend to many," said Jersey Race Club's Charlotte Dickson.

"She was a hugely supportive and committed member of the club. Everyone is very shocked and terribly saddened by the news."

Her name will never be forgotten because of her achievements

Last season, horses such as Landolino, Bollin Fergus and Robbmaa were entered under Le Brocq's name.

"She was not only part and parcel of Jersey racing - in many respects she was Jersey racing," journalist and Les Landes commentator Lee McKenzie told BBC Radio Jersey.

"For decades, whenever you mentioned Jersey racing, Joan Le Brocq's name was never far away.

"She is going to leave one almighty hole in the Jersey racing scene, but her name will never be forgotten because of her achievements."