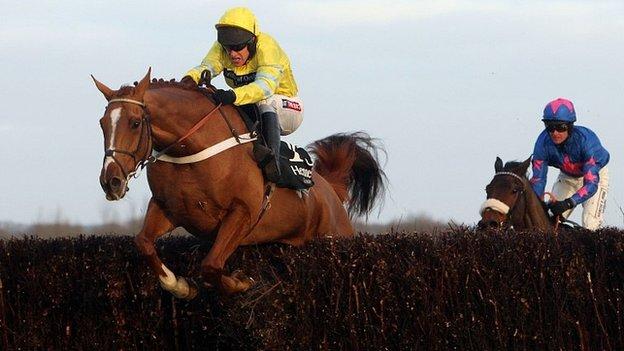 The Nicky Henderson-trained 20-1 chance gave jockey Barry Geraghty his second straight win in the race after riding Bobs Worth to victory last year.

Imperial Commander, the 2010 Cheltenham Gold Cup winner competing in his last race, set the pace alongside Highland Lodge in a competitive renewal of the staying handicap, seen as a pointer to the Grand National.

Cloudy Too joined Highland Lodge at the front when 12-year-old Imperial Commander weakened, before Rocky Creek and Triolo d'Alene took up the running going into the last.

But Triolo d'Alene found something extra to record another win to add to last year's Topham Chase at Aintree.

Geraghty said: "He was great. I had a brilliant ride off him in the Topham and he was brilliant today.

"He has a great attitude. On that ground and on a stiff track, he finds it so easy."

Henderson said: "He's a lovely horse with a lovely attitude, but Barry has been begging me all year to save him for the National.

"We've mucked that up completely, but the Hennessy is very special."

Andy Stewart, joint-owner of Rocky Creek, said: "I thought he ran very well and was just beaten by a better horse.

"The idea is to go for the Welsh National, but Aintree is the big target."

Imperial Commander's trainer Nigel Twiston-Davies said: "We can't take away all those amazing days he's had for us. We'll remember him for ever."