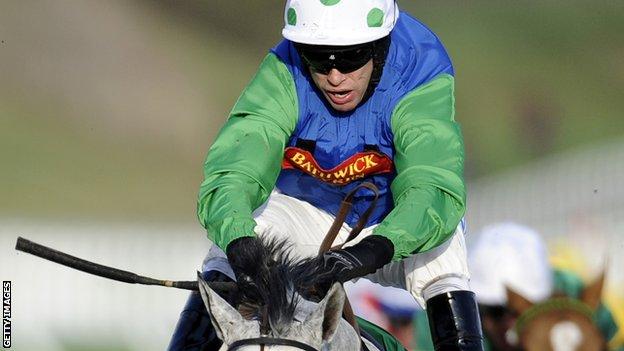 The British Horseracing Authority has ordered an inquiry after an incident in the jockeys' room at Newbury left Timmy Murphy with an injured shoulder.

Murphy, 39, was due to ride leading hope Our Father in the Gold Cup at 15:00 GMT but was ruled out by the injury and replaced by Conor O'Farrell.

It is believed Murphy was involved in a confrontation with a fellow jockey.

Dougie Costello is on favourite Lord Windermere after Robbie McNamara broke a collarbone in training on Friday.

The race will also be the final run of 2010 Cheltenham Gold Cup winner Imperial Commander, trained by Nigel Twiston-Davies.

Murphy, who has had problems with a dislocated left shoulder in the past, looked in considerable pain as he walked away from the weighing room and was helped into an ambulance after riding Upsilon Bleu to fourth place in Friday's Newbury Open Handicap Chase.

Newbury racecourse, home of the prestigious Hennessy Gold Cup for all but the initial three of its 56 years, needs to do a lot of work to ensure its future is as glittering as its past

Read more of Cornelius' verdict on Newbury ahead of Hennessy day

He withdrew from his ride on Aldeburgh in the later "National Hunt" Maiden Hurdle.

The circumstances of Murphy's injuries remain unknown, however,

Murphy's wife Verity said: "He was feeling it when he came back in after the 2.40 [Newbury Open Handicap Chase]. He's hurt his shoulder, but is feeling much better now and will know more about riding in the morning."

Paul Barton, head of stewarding at the British Horseracing Authority, was on duty at Newbury.

He said: "Nothing has been reported to me, so there's nothing for us to do. All I know is that Timmy Murphy has gone to hospital, I haven't heard anything else."

Lord Windermere trainer Jim Culloty brought in Costello after McNamara's fall just over 24 hours before the race at Newbury.

The seven-year-old is aiming to emulate 2012 winner Bobs Worth in claiming both the Hennessy and the RSA Chase in the same year.

"He's got a serious chance and I'm over the moon to be asked," said Costello.

Lord Windermere was quoted as a 25-1 chance for the 2014 Gold Cup in the wake of his triumph in the RSA Chase at Cheltenham in March earlier this year, and has been well supported ahead of the Hennessy.

"It's a shame on Robbie's part," Costello added. "It was such a good ride and just one of those things. It's a great spare for me to pick up."

Meanwhile at Newcastle, Champion Hurdle contenders My Tent Or Yours and Melodic Rendezvous head the field for the Fighting Fifth Hurdle (14:05 GMT).