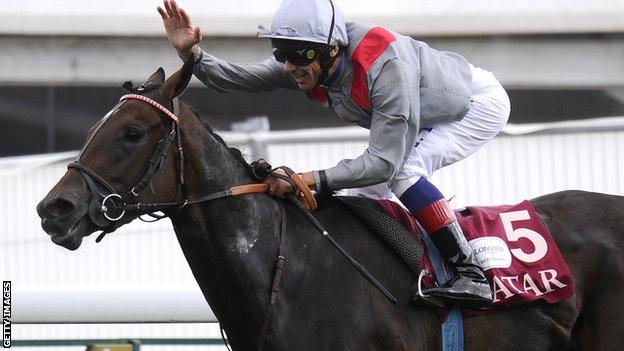 A member of the Qatar royal family aims to become the leading global power in horse racing and rival the bloodstock empires of Godolphin and Coolmore.

Sheikh Joaan Al Thani plans to acquire a breeding base in the UK or Ireland. 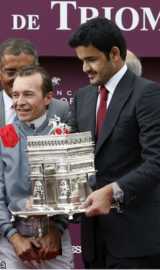 "Our ambition is to have the most successful horse racing operation in the world," said the sheikh's spokesman Nasser Sherida Al Kaabi.

"When he entered the race, he wanted to be number one. He doesn't accept being second."

The new operation will have its own racing silks and will sponsor top British races.

The announcement of an ambitious long-term investment in racing will see the Qatari royal's operation take on big players, such as Dubai ruler Sheikh Mohammed's Godolphin team and the Ireland-based Coolmore outfit headed by John Magnier.

"Seeing such a person getting involved in racing is very exciting," said Herbert, who will continue with his other interests but head a UK office next to Highclere's base.

Sheikh Joaan, along with his cousin Sheikh Fahad who runs a separate racing team, is a relative newcomer to thoroughbred competition, although he has a background in Arabian racing.

He has enjoyed significant success as an owner in the last 18 months, and particularly in the 2013 season with big-money purchases such as Toronado, who won the Sussex Stakes at Glorious Goodwood, Olympic Glory (Queen Elizabeth II Stakes, Ascot) and Treve (Prix de l'Arc de Triomphe).

Al Kaabi said the sheikh now has about 100 horses, split between France and the UK, with British trainers including Richard Hannon, Marco Botti and Luca Cumani.

The string could be expanded in years to come, but the organisation would concentrate on "quality not quantity".

Jockey Faleh Bogunaim, a 21-year-old professional in Qatar, spent a summer stint at Cumani's Newmarket stable and it is hoped he can eventually progress to race at the top level.

Frankie is a major asset to us. We made the right choice when we appointed him

The 42-year-old Dettori, who was Godolphin's main rider for 18 years until a split in October 2012, was appointed as principal rider in July and will act as his mentor.

Godolphin, which has more than 400 horses in the UK, enjoyed a record number of winners this year despite a doping scandal which led to Newmarket-based trainer Mahmood Al Zarooni being banned for eight years.

Now three-time champion jockey Dettori, who returned from a six-month drugs ban earlier in 2013, will be in direct opposition - with some plum rides - when he comes back from injury next year.

"Frankie is a major asset to us. We believe we made the right choice when we appointed him," added Al Kaabi.

While Dettori will be on most of the leading horses including French filly Treve as she bids for a second Arc, it is expected Hannon's Al Shaqab horses such as Toronado and Olympic Glory will be ridden by the Wiltshire trainer's stable jockey Richard Hughes.

Sheikh Joaan, who recently spent a record £5m on a yearling filly, has longer term plans which include having horses in the United States and Australia, plus a "spectacular" new racetrack in Qatar.

He will keep the grey and maroon racing colours, associated with Treve, but Al Shaqab Racing are seeking new silks for its future runners.