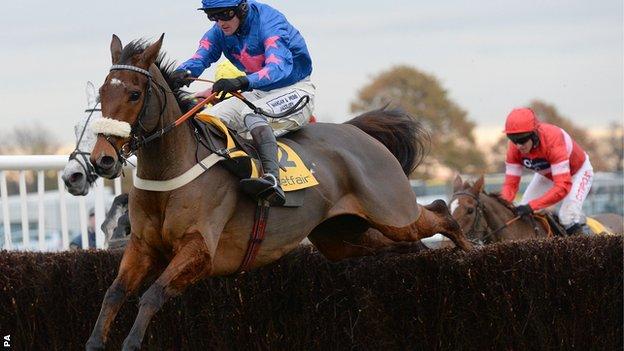 Ridden by Joe Tizzard, and trained by the winning jockey's father Colin, Cue Card pulled away after the final fence having been at the head of the field for most of the race.

The 9-1 shot finished ahead of Dynaste, with 2012 Betfair Chase winner Silviniaco Conti third.

Favourite and Cheltenham Gold Cup winner Bobs Worth finished out of the places after a disappointing showing.

It was only the second time in his career that Cue Card had run over three miles, and after shaking off Roi Du Mee, Tizzard kept Silviniaco Conti at bay to win by four and a half lengths.

Bobs Worth, the 15-8 favourite, never made a realistic challenge over the three mile, one furlong chase, leaving trainer Nicky Henderson still searching for his first win in this race.

"I found it so easy, he just loves lolloping along, the pace he's got for a race like this is lovely," said jockey Tizzard. "He's got that gear which all the best horses have, they have got to be able to cruise.

"It's so nice that he's proved he can get in there, and it makes him a real Gold Cup horse."