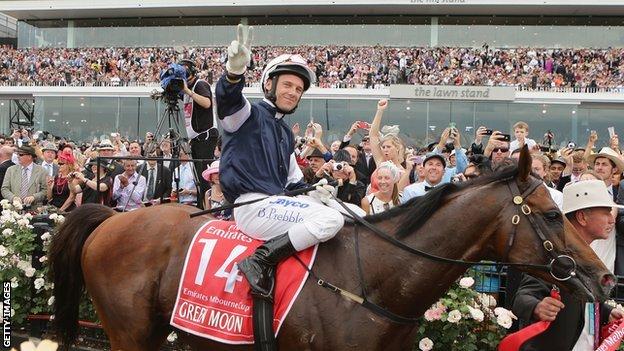 Mount Athos and Brown Panther head a strong European entry for the Melbourne Cup at Flemington on 5 November.

Mount Athos, trained by Luca Cumani, finished fifth in last year's race, which was won by Green Moon, who is also among the 135 horses entered.

Brown Panther, owned by ex-footballer Michael Owen, triumphed in the Goodwood Cup on his most recent outing.

Dunaden, winner of the race in 2011, has been entered once again by his French trainer Mikel Delzangles.

There are 28 entries from outside Australia, with British-trained horses hoping to claim a first win in the race.

Red Cadeaux was beaten by a nose by Dunaden two years ago and is one of two entries for Ed Dunlop, along with Joshua Tree.

The Sir Michael Stoute-trained Opinion disappointed in the Ebor last time but has been given an entry, while Saeed bin Suroor has a handful of contenders - Lonsdale Cup winner Ahzeemah, Colour Vision, Royal Empire and Songcraft - in the mix.

Dermot Weld has twice won the race for Ireland with Vintage Crop (1993) and Media Puzzle (2002) and he has entered Pale Mimosa and Voleuse De Coeurs, while compatriot Willie Mullins could send Ascot Gold Cup runner-up Simenon over to the race.

Racing Victoria's Greg Carpenter said: "To have the past two winners in Green Moon and Dunaden, together with representatives from most of Europe's premier stables, among the nominations is testimony to the stature of the Melbourne Cup on the world stage."