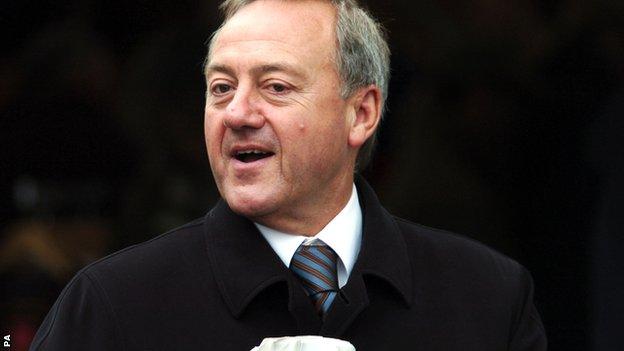 Comply Or Die's Aintree victory was the peak of a lengthy and successful career in racing for the former bank clerk.

David Johnson, or DJ as many pals knew him, was a much-liked figure in horse racing.

His association with the now retired champion trainer Martin Pipe, and later his son David, brought many notable victories.

He enjoyed life, relished a gamble, and bore his illness with great dignity. After the death last month of Sir Henry Cecil, the sport mourns the loss of another big figure.

Johnson, champion owner over jumps on six occasions, had a fruitful association with trainer Martin Pipe and his son David.

"It is very sad news," said David Pipe. "He was more than an owner - he was a great friend to dad and myself."

Other notable horses owned by London-born Johnson included Well Chief, winner of the Arkle Trophy, and Celestial Gold, which won the Paddy Power Gold Cup and Hennessey Gold Cup in 2004.

Our Vic, Cyfor Malta, Classified, It Takes Time, Liberman, Champleve, Take Control and Or Royal were other successful Johnson-owned names.

"We had a lot of success together. He was champion owner numerous times, but more than that it was great fun - he made it great fun," added David Pipe.

"He was a real enthusiast. That day at Aintree was one we will never forget - it was wonderful to win the National for him.

"It is a sad loss to his family and to racing."

Timmy Murphy, who rode Comply Or Die to victory at Aintree, said: "Today I've lost one of the most important people in my life - my friend, my boss David Johnson. Rest in peace x."

Eighteen-time champion jockey AP McCoy, former stable jockey to Martin Pipe, wrote on Twitter: "So sad David Johnson has died after a very brave battle with cancer. He was a champion owner, a champion man and a great friend.

"Martin Pipe, David Johnson and I had so many winners and great days together. We won three Arkle Chases at the Cheltenham Festival to name but a few."