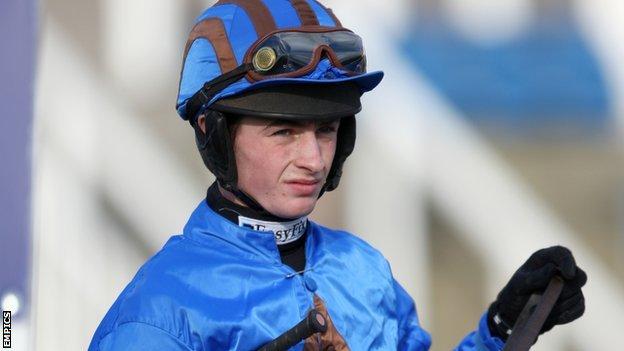 Jockey Brian Toomey is in hospital with a life-threatening head injury after suffering a heavy fall during a race.

The 24-year-old Irish rider was partnering Solway Dandy at Perth when the horse fell three flights from home.

Toomey is attached to the yard of North Yorkshire trainer Kevin Ryan and is the boyfriend of Ryan's daughter, Amy.

Champion jockey AP McCoy was among the figures from the racing world to send their best wishes, tweeting: "Thoughts and prayers are with Brian Toomey."

The dangers of jump racing

Speaking shortly before 22:00 BST on Thursday, a spokesman for NHS Tayside said Toomey was "suffering from a life-threatening head injury".

Amy Ryan, last season's champion apprentice rider, travelled from a meeting at Haydock, Merseyside, to the hospital in Scotland. The jockey's family is expected to visit him on Friday.

An air ambulance arrived shortly after the accident, which happened in the 17:00 race, but Toomey was transported to Dundee's Ninewells Hospital by road.

Toomey has ridden 49 winners over the jumps since 2008 and has represented Ryan's stable at the Cheltenham, Aintree and Punchestown festivals.

He has three victories from 24 rides in the 2013-14 National Hunt season, including Whiskey Ridge for Grand National-winning trainer Sue Smith at Wetherby on 30 May.

Many of his weighing room colleagues have been sending their best wishes, including Thomas Messenger, who tweeted: "Praying for good news on Toomey today. Thoughts are with Amy and his family. It's a terrible game at times."

Paddy Brennan, who won the Cheltenham Gold Cup in 2010 on Imperial Commander, said: "Praying for Brian Toomey this morning. Thoughts with his family and Amy."