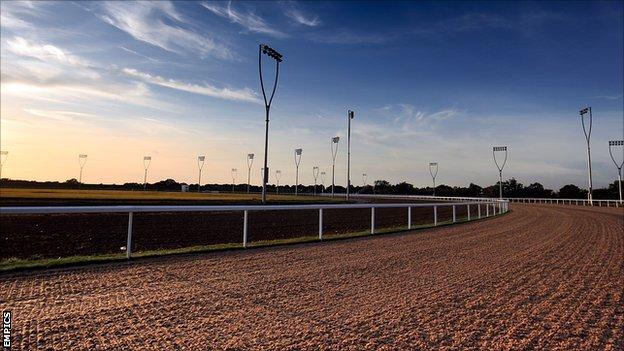 The owners of Great Leighs have said they are "angry and disappointed" at being denied racing fixtures for the second successive year.

to host cards at the flat course near Chelmsford in 2014.

"To say I am disappointed and angry about the decision is a huge understatement."

The Essex all-weather course, which was the first new racing venue in the UK for 81 years when it opened in April 2008,

It was initially open for less than a year, closing in January 2009 when the course went into administration and had its racing licence revoked.

New owners were not found until November 2011, when MC Racetracks came in with the hope of holding 35 to 45 races per year.

"We had put forward a very robust plan," added Brown, who is a former chairman of the Racecourse Association.

"We had the backing of other partners, the backing of the bank and various shareholders and still this did not seem to satisfy them. That's why we're particularly angry.

"We met their guidelines. The guidelines require you to have a first-class track, financial plans and the proper planning permissions. We had those.

"It's all about interpretations."

In a statement on Thursday, the BHA said the reasons for rejecting the application would "remain private".

Brown believes pressure from other race tracks could have contributed to the decision.

"It's inconvenient because there are a limited number of race meetings that can take place and had we been given fixtures it would have taken away from other race courses," he said.

"I would anticipate there would have been some lobbying and that's why we're annoyed."

The BHA has said it is unable to comment on the situation for legal reasons, but it is believed their decision is based more on concerns over the proposed business strategy put in place and the reputational risk racing the UK if Great Leighs were to fail again.

There are 58 active courses in the UK after Hereford and Folkestone both closed for financial reasons last year.