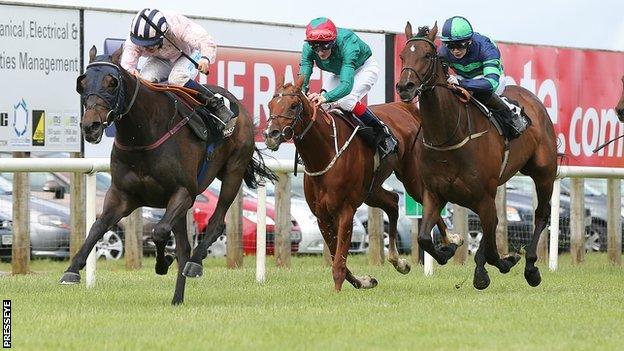 Sir Ector, trained in Armagh by Jimmy Lambe and ridden by Chris Hayes, upset the odds by winning the Ulster Derby at Down Royal on Saturday.

The horse, priced at 14-1, was the first Ulster trained winner of the biggest event in the Northern Ireland flat racing calendar in the modern era.

For 25-year-old jockey Hayes, it was his third success in the Ulster Derby.

"This is a fantastic day for me and for the yard. To win this race was one of my ambitions," said Lambe.

"The softening ground helped my horse as he is laden with stamina - he stayed on well and our gameplan worked to perfection," he added.

Sir Ector, who had previously won at Down Royal over jumps, won by two and a half lengths.

The 7-2 favourite Maggie Dalton was second of the 14 runners, with Scatter Dice (7-1) third home after the one mile and five furlongs.