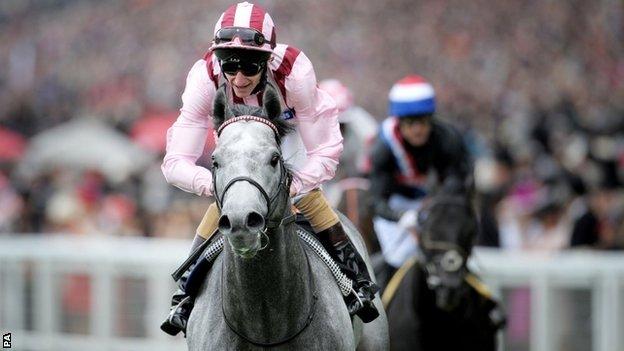 Lethal Force won the battle of the sprinters to claim victory in the Diamond Jubilee Stakes on the final day of the Royal Ascot meeting.

The four-year-old, ridden by Adam Kirby, took revenge on Society Rock after defeat at York last time out.

The Clive Cox-trained grey (11-1) was well placed early on and, after kicking on with two furlongs to go, showed his speed to win by two lengths.

Lethal Force had run at the last two Royal meetings, finishing fourth in last year's Jersey Stakes and fourth in the Coventry Stakes in 2011 but he made sure of success this time with a bold display.

Cox said: "I'm thrilled for everyone. It's just amazing - this is what it's all about.

"Adam is such a brilliant rider, but it's fantastic for the whole team at home. When he sent him on, it was explosive."

Kirby added: "I'm really, really pleased. We've always had a lot of respect for this horse and, to be fair to him, he's always ran his race without ever winning.

"The only man I've got to thank is Clive Cox."

"He's in the July Cup, but I'm not sure if Newmarket will suit him, if I'm honest - although it does look logical," he said.

"Reckless Abandon (stablemate) is also in it as well, but we won't worry about that now."

Jamie Spencer partnered York Glory (14-1) to a clear-cut victory in the Wokingham Stakes to give trainer Kevin Ryan his second win of the week.

Kieren Fallon kicked early on the well-backed Gabriel's Lad but he quickly faded and although Shropshire had made eyecatching progress to hit the front, Spencer always looked to have his measure and galloped clear to win by a length and three-quarters with Dinkum Diamond third.

Meanwhile, Ryan Moore was always in the right place on Opinion as he made his substitute ride in the Duke of Edinburgh Handicap a winning one.

Moore was supposed to be riding Rye House but when trainer Sir Michael Stoute took him out at the 11th hour due to the fast ground, Moore moved to ride his stablemate while Richard Hughes, who was supposed to ride Opinion, replaced the injured Paul Hanagan on Lahaag but finished unplaced.

And in the final race of the meeting, the Queen Alexandra Stakes, Chiberta King and jockey Jimmy Fortune denied Frankie Dettori a fairytale victory on Shahwardi.

The Italian, who returned from a drugs ban earlier this month, had yet to claim a winner at this year's Royal meeting, finished fast but it was Chiberta King (8-1) who won by a head.

Despite failing to win on the last day of the meeting, Aidan O'Brien had done enough to win the leading trainer award with four victories while Johnny Murtagh's victory on Thomas Chippendale in the Hardwicke Stakes gave him the leading jockey award ahead of O'Brien's son Joseph, Ryan Moore and James Doyle, who had three apiece.