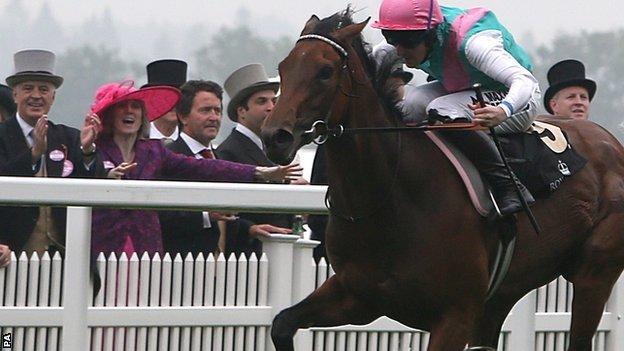 Riposte won the Ribblesdale Stakes at Royal Ascot to provide a poignant winner for Lady Cecil, the widow of Sir Henry Cecil who died nine days ago.

The filly won at 9-2 under Tom Queally, who rides for the Warren Place Stables in Newmarket, where Lady Cecil has temporarily taken the training licence.

She was close to tears after an emotional win which brought a rapturous reception from the Ladies' Day crowd.

Riposte trainer Lady Cecil said:"That was for Henry, for the Prince and all the staff at Warren Place. I don't really have the words to say what I am feeling right now but I'm sure that people have the idea."

The three-year-old bay filly was towards the back of the field early in the contest but jockey Queally was able to jink his way through the field before comfortably attacking over the final two furlongs leaving Just Pretending and Elik in his wake to land the Group Two prize.

"Henry was just adored by so many people, even people who never met him. We hardly dared dream that we would have a winner, but Henry would be relishing this because he loved Ascot," Lady Cecil added.

"Keeping busy is what is keeping us all going, I think if we had nothing to do we would just fall apart.

"As you can imagine it's been a tough, tough week for everyone at Warren Place. But I'm sure Henry is looking down on us today."