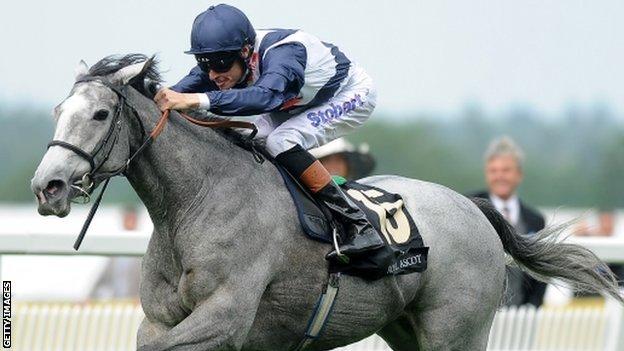 Sky Lantern left her rivals trailing with a comfortable victory in the Coronation Stakes at Royal Ascot.

The 9-2 joint favourite had given champion jockey Richard Hughes his first British Classic winner in last month's 1,000 Guineas at Newmarket.

The pair overcame a bad draw this time and came from last to challenge with two furlongs left.

Once Sky Lantern quickened up there was no stopping her with Kenhope (33-1) second and Just The Judge (5-1) third.

Hughes had the Richard Hannon-trained grey filly, who was drawn in stall 16 of 17 at the back of the field and it seemed a big task to claim a second big-race win

The well-fancied Irish challenger Big Break hit the front a furlong and a half out, but she was soon challenged by Viztoria and, although Just The Judge started her challenge down the outside, they all looked slow compared to the four-length winner.

Sky Lantern had ended Just The Judge's unbeaten record at Newmarket and there were many who believed that her win was a lucky one, but she showed plenty of skill and speed this time around to show that win was no fluke.

"Sky Lantern lit up Ascot with her decisive success in the Coronation Stakes and gave champion jockey Richard Hughes something to smile about.

"Hughes, on Toronado, was just beaten in a photo finish by Dawn Approach in the St James's Palace Stakes on Tuesday and was fourth this week on well-fancied Britannia Stakes favourite Wentworth.

"But the 40-year-old was in command aboard the galloping grey Sky Lantern, and was even able to pat his filly as they crossed the winning line after overcoming a wide draw to prove May's 1,000 Guineas win at Newmarket was no fluke."

Richard Hannon jnr, the trainer's son and assistant, said: "She has a real habit of getting herself in trouble, but she won very well and won fair and square today.

"The race suited her as they went very quick. She's a really good filly and a pleasure to deal with."

Hughes had failed to get a winner over the first three days of the meeting and relaxed for Friday by playing golf with fellow jockey Pat Dobbs - and beating his rival on the course before guiding Sky Lantern to victory.

"The job is to ride winners the way I always ride them, to get them into a rhythm and find the gaps, and if they come they come and if they don't they don't. They haven't been coming all week and it's been a nightmare," he said.

"Richard [Hannon Jr] believed in me, and when I said, 'I want to drop this filly out and try to overcome the draw' and he said, 'Ride the way you always ride'. You have to keep belief in yourself, and if you don't there are plenty of fellas out there to knock you down.

"I went out this morning and played golf with Pat Dobbs in a bid to clear my head. I needed that because things were just getting to me. I needed to get away for a couple of hours to freshen the mind up."

The 5-4 favourite Leading Light, trained by Aidan O'Brien and ridden by his son Joseph, won the Queen's Vase, which is named in memory of Sir Henry Cecil, after holding off the challenge of Feel Like Dancing and Ryan Moore.

The Lady Cecil-trained Disclaimer, which would have been an emotional winner for the late trainer's widow, briefly challenged but faded late on and was well beaten.