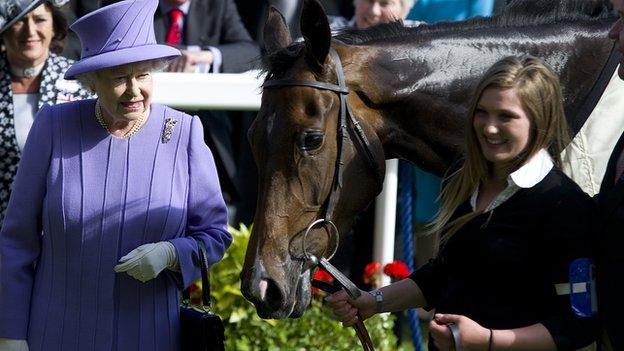 Racing's leading lady seeks a historic success on Ladies' Day as Estimate, owned by the Queen, runs in the Gold Cup at Royal Ascot on Thursday.

The filly, trained by Sir Michael Stoute, is expected to go off favourite for the feature race after winning at the meeting in Diamond Jubilee year.

Strong competition at the Flat racing carnival comes in the form of Simenon.

The bay gelding was a dual winner at the 2012 meeting for Ireland's champion jumps trainer Willie Mullins.

In the fillies-only Ribblesdale Stakes, the Irish horse Alive Alive Oh is among a field which includes The Lark, third in the Oaks at Epsom.

Of Estimate, Stoute said: "Her preparation has gone well. She enjoys Ascot, but this is much tougher than anything she has encountered before."

Estimate won the Queen's Vase last year, one of three races in which Her Majesty traditionally presents the trophy, and she received the prize from her husband, the Duke of Edinburgh.

The Queen at Ascot

He has been absent this year, having left hospital on Monday after an exploratory stomach operation.

One well-known figure back at Royal Ascot, albeit in a less high-profile role than recent years, is jockey Frankie Dettori, who rides Times Up in the Gold Cup.

Dettori is the leading current jockey at the meeting with 47 victories, most of which came during a successful 18-year association with Sheikh Mohammed's Godolphin racing operation.

But much has changed since he rode Colour Vision to the jockey's fifth victory in the 2012 Gold Cup in the team's royal blue colours.

The Italian-born jockey survived a stewards' inquiry 12 months ago as he edged out stablemate Opinion Poll, ridden by Mickael Barzalona.

Barzalona and Silvestre de Sousa were recruited as Godolphin jockeys last year, undermining the position of Dettori - who famously went through the card with all seven winners at another Ascot meeting in 1996 - as number one jockey.

Dettori split with Godolphin in October 2012 to start a freelance career, but was later banned for six months after testing positive for cocaine in France.

As he sat out his ban, Godolphin endured a drugs scandal of their own - with trainer Mahmood Al Zarooni banned for eight years after admitting giving banned anabolic steroids to a number of horses.

Colour Vision runs again in the Gold Cup this year, with Silvestre de Sousa on board, for trainer Saeed bin Suroor, while Dettori teams up with Times Up for Ed Dunlop.

Another previous winner in a fascinating contest is the 2010 victor Rite Of Passage, trained in Ireland by Dermot Weld.

In the Ribblesdale, Alive Alive Oh - named after a refrain from the Irish ditty Molly Malone - comes into the race on the back of two victories for trainer Tommy Stack.

The Lark, who was third in the Oaks at Epsom on 31 May for trainer Michael Bell, was declared a non-runner on Thursday morning because of the going, which is described as good to firm.

Leading juveniles contest the opening Norfolk Stakes (14:30 BST) on a six-race card, with Aidan O'Brien's Coach House and the Godolphin horse Emirates Flyer among the contenders.