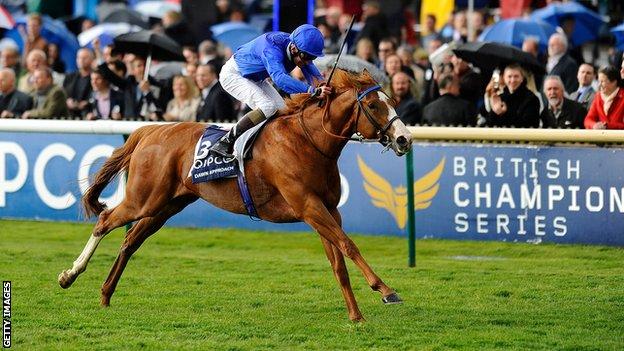 On a day when Royal Ascot remembered its finest English trainer, it was the Irish who took centre stage.

The famous Berkshire racecourse fell quiet 13 minutes before the opening race as a huge crowd around the parade ring observed a moving minute's silence in memory of Sir Henry Cecil,

There followed a polite round of applause for the man who trained a record 75 winners at this meeting. It was a simple and emotional tribute.

As racegoers gathered themselves and the 2013 meeting's first day unfolded, trainers based on the other side of the Irish Sea masterminded victories in the first four races.

Aidan O'Brien, who has 39 Ascot wins, may one day go on to threaten Cecil's tally and he brought up a double with outstanding performances from young equine stars - Declaration Of War in the opening Queen Anne Stakes and his half-brother War Command in the Coventry Stakes.

Racing has been hit by negative headlines in recent weeks, with Dawn Approach's majority shareholder, Sheikh Mohammed's Godolphin team, at the centre of a

But this race, with Dawn Approach slugging it out alongside Toronado, and edging the verdict by a short head, was one to stir the sporting soul.

I doubt any horse has gone from finishing last in the Derby to landing the St James's Palace Stakes less than three weeks later.

"I think Sheikh Mohammed was just as anxious to get back into the fray as I was," said Bolger after his star three-year-old survived a stewards' inquiry looking at possible interference.

"I always had faith in the horse and know what happened at Epsom was a one-off.

"Anybody who saw the bump he got at Epsom…it would have put a lesser horse off and he didn't flinch."

Despite doubts regarding his stamina over a mile and a half, Dawn Approach was sent off favourite for the Derby on 1 June after a six-length victory in the one-mile 2,000 Guineas, his eighth win from eight races.

However, he pulled very hard after being knocked coming out of the stalls and lost all chance in a race

Bolger said he put a line through the performance and started all over again, giving the son of his 2008 Derby winner New Approach a few days to allow his mouth to heal from tugging so hard on the bit.

After working well under the stable's Pat O'Donovan, the horse was "bucking and squealing again".

Bolger had initially firmly ruled out Royal Ascot as a possible target, and the colt's odds drifted accordingly, but his newfound zest led the trainer to text Godolphin racing manager Simon Crisford with the message: "Get ready for a surprise."

Crisford, who has stoically endured the unenviable task of dealing with the fall-out from the anabolic steroids scandal which saw trainer Mahmood Al Zarooni banned for eight years, was in a more upbeat mood after this triumph.

Sheikh Mohammed has a 51% share in Dawn Approach, with Bolger retaining the remainder, and he could one day prove a sire of future champions.

"There was a lot at stake - this is a stallion race and he has delivered the goods," Crisford said.

"We are piggybacking on the expertise and brilliance of this trainer. It took immense courage to turn up here."

And he scotched the suggestion, whispered in some circles, that the sheikh may have put some pressure on Bolger to run Dawn Approach in the Derby.

"Jim said he was leaning towards the Derby and no-one knows the horse better than him," added Crisford.

Meanwhile, O'Brien brought Declaration Of War back from a flop in the Lockinge Stakes at Newbury to land the Queen Anne Stakes as the globetrotting American raider Animal Kingdom found this test one too many.

Bidding for a historic Kentucky Derby-Dubai World Cup-Royal Ascot treble, he finished 11th of 13 and a career at stud in Australia awaits.

O'Brien later doubled up with another son of the stallion War Front as War Command stormed the Coventry Stakes by six lengths, bearing echoes of, dare I say it, Cecil's great racehorse Frankel.

Lady Cecil, the widow of Sir Henry who has temporarily taken over his training licence, sent out one runner at Royal Ascot on Tuesday.

Tiger Cliff was 4-1 favourite to provide an emotional success, but the Irish even had a say in that.

He finished second in the Ascot Handicap to Well Sharp, for the Irish triumvirate of trainer Jonjo O'Neill, jockey Fran Berry and owner JP McManus.

Admittedly, O'Neill is based in Gloucestershire, so it will register as an English-trained winner, but it was a day when the Irish eyes were smiling.

O'Brien tops the trainer standings, and countryman Johnny Murtagh heads the jockeys' list after a 152-1 double with Sole Power in the King's Stand Stakes and Extortionist in the closing Windsor Castle Stakes.

Earlier, O'Brien had warned punters that his Irish 2,000 Guineas winner Magician had a tough week and might face a stiff task against the likes of Dawn Approach and Toronado in the feature race.

He told the bizarre tale of how the horse was spooked when a swallow flew into an equine spa and injured his front legs while trying to jump out of the water.

Perhaps the day proved for O'Brien and his Irish compatriots that one swallow does not make a summer.