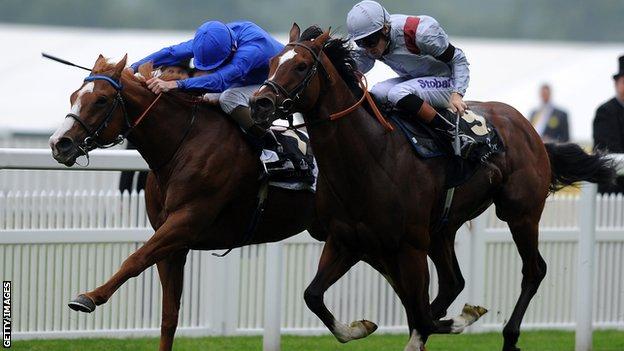 The Jim Bolger-trained horse survived a stewards' enquiry to claim the prize for the Godolphin stables.

The three-year-old recovered from a poor run in the Derby, where he finished last of 12 horses, to hold off the challenge of Toronado.

Earlier, Animal Kingdom disappointed in the Queen Anne Stakes as he finished 11th of the 13 runners.

The American horse struggled to get into his stride in a race won by 15/2 shot Declaration of War.

But his failure was soon overshadowed by a return to form of Dawn Approach as he won at a price of 5/4.

Kevin Manning's mount had been knocked into Toronado by Magician two furlongs out, but stewards did not change the result.

And his win was a welcome lift to a Godolphin stables recently embroiled in an embarrassing doping scandal.

Godolphin racing manager Simon Crisford said: "This is the biggest race of the whole week and it matters.

"I can't describe how great this win feels right now. It's a great day in Godolphin's history."

While Godolphin celebrated, Animal Kingdom's camp were left licking their wounds as the 5/4 favourite ended his career by flopping at the royal meeting.

The colt was expected to create history by becoming the first horse to secure a Group One victory on three different track surfaces, having also won the Kentucky Derby (dirt) and Dubai World Cup (synthetic).

But he never looked comfortable and was out of the running half way through the one-mile race.

"He didn't put the effort in. It was just not him at all," said his jockey Johnny Velazquez.

The third Group One race of the card was taken by Sole Power as he won the King's Stand Stakes, while War Command won the Coventry Stakes.