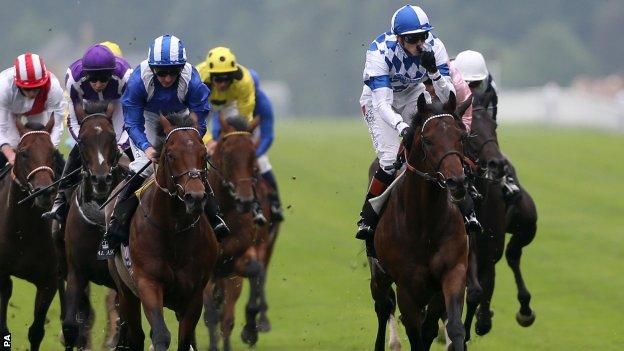 Jockey James Doyle had an 891-1 treble on day two at Royal Ascot, including victory on 11-4 shot Al Kazeem in the Group One Prince of Wales's Stakes.

The 25-year-old added wins on Belgian Bill (33-1) in the Royal Hunt Cup and 6-1 chance Rizeena in the Queen Mary to lead the jockeys' standings.

"I thought I'd have one winner, but to have three is absolutely amazing," said Doyle, from Berkshire.

"It's fantastic, and very difficult to put into words."

Doyle opened up with one of the biggest victories of his career when he led Al Kazeem to a dramatic win in the £500,000 Prince of Wales's Stakes.

The 14-1 Mukhadram led for much of the feature race but was beaten over the final strides by the Roger Charlton-trained five-year-old.

Al Kazeem defeated the O'Brien runner to win the Tattersalls Gold Cup at the Curragh in May, but there was to be no repeat of that duel as the pack focused on chasing down Mukhadram, with jockey Paul Hanagan on board.

The four-year-old looked set for a shock victory, but did not have the legs in the final furlong to hold off Al Kazeem, who won by a neck.

'The Doyler', as they call him, has impressed on all sorts of horses in all kinds of races - notably a major prize in Dubai - but this Royal Ascot hat-trick takes his career onto a different plane.

Highlight of the three was a superbly well-judged ride on Al Kazeem, also a rising star, and together they can now take each other to new heights.

The King George, back at Ascot next month, and the Arc, in Paris in October, are now being talked about.

"We nearly ran him in the autumn, but decided to give him more time," Charlton told Channel 4 Racing. "He's a tough and a genuine horse.

"For a young guy who hasn't ridden too many good horses, I'm pleased for James. He's going to go forwards.

"I have longed to have a runner in the Prix de l'Arc de Triomphe, but if Al Kazeem was running he wouldn't go in the King George then the Arc."

Doyle's second success of the day came in the Royal Hunt Cup on board George Baker's Belgian Bill, before he completed his treble with the Clive Brittain-trained Rizeena.

The 100-30 favourite beat Ladys First by a neck, with Dank in third.

Winning jockey Wayne Lordan said: "I travelled really well and might have got there a little soon. She didn't kill herself in front, but she picked up when something joined me."