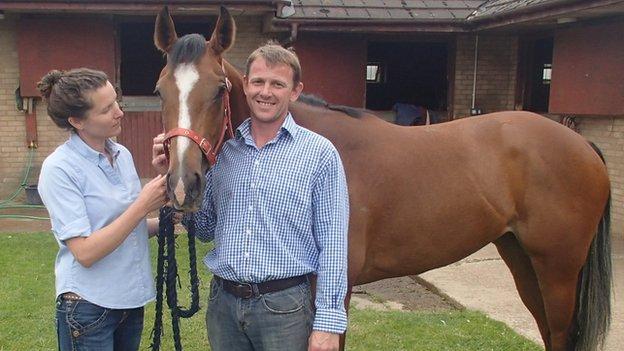 Newmarket trainer Phil McEntee is "living the dream" with a horse that cost £400 which will run in the Queen Mary Stakes at Royal Ascot this week.

"I'll be gutted if she's not in the top six, but she owes us nothing."

McEntee's wife, Rebecca, bought the two-year-old at Ascot sales in April, with the intention of using her as an amateur horse for their son.

But the 66-1 win at Lingfield two weeks ago, which was written off as a fluke by some pundits, has attracted interest from potential buyers across the globe and provided a cash boost for her owner and trainer, who had placed a wager on their charge.

"We had sufficient amount on that we can afford to go and buy our Royal Ascot outfits," said 44-year-old McEntee.

"The manner of her victory is what surprised me. She was so professional from the gate and did it like she had done it umpteen times before."

Wednesday's Group Two Queen Mary Stakes will mark a return to the course where the McEntees first saw Baytown Kestrel.

And the trainer believes the filly is worthy of her place alongside horses from the stables of luminaries such as Channon, Aidan O'Brien and Godolphin's Saeed bin Suroor.

"The horse that was second to us at Lingfield cost £20,000. Our filly cost £400, is trained by Phil McEntee, so we're making fools of ourselves.

"Mick Channon can go to Ascot with his horse that finished second and nobody bats an eyelid because he's a top trainer.

"Plenty of people think it was a fluke. I want to prove to everyone that she is a good filly.