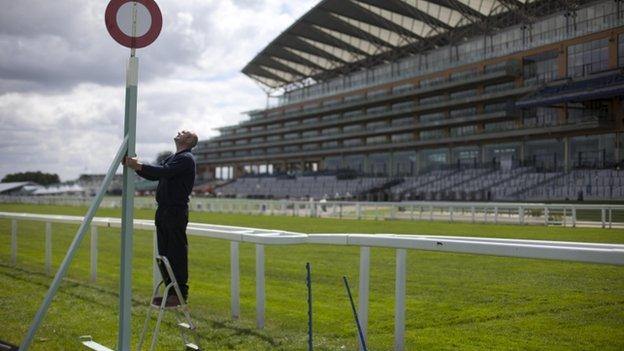 Royal Ascot will start with a poignant note on Tuesday as the famous meeting prepares to welcome 280,000 racegoers over five days.

Following the traditional pre-racing procession down the Berkshire course, headed by the Queen, a minute's silence will be held in honour of Sir Henry Cecil.

The legendary trainer, who saddled a record 75 Royal Ascot winners, died aged 70 a week before the fixture where top-class racing mixes with high fashion.

His widow Lady Cecil plans to have runners every day, while Kentucky Derby winner Animal Kingdom is possibly the main equine attraction on day one.

Showers are expected during the week although temperatures are expected to top 20C and the going at the track is described as good.

The meeting is renowned around the world as a carnival of colour, with an international cast list of top thoroughbreds watched by huge crowds ranging from everyday punters in the Silver Ring section to top-hatted gents in the members-only Royal Enclosure.

With a total of 30 races, horse racing - the so-called sport of kings - looks for a lift after recent doping and corruption cases.

The Queen will once again attend the meeting, at which she will hope to further her tally of 21 winners when Estimate runs in the Gold Cup on Thursday.

But she is expected to be without the Duke of Edinburgh, who left hospital on Monday after an exploratory stomach operation in hospital.

The Royal procession at 14:00 BST precedes the opening contest and a whirlwind start to the fixture which sees three Group One races.

After the Queen Anne (14:30) over a mile, comes the sprinters contesting the King's Stand Stakes, followed by the St James's Palace Stakes where English 2,000 Guineas winner Dawn Approach and Irish Guineas victor Magician are among those doing battle.

Versatile colt Animal Kingdom, who also landed the Dubai World Cup in March, is odds-on favourite for the opener, which Cecil's all-time great Frankel landed by an imposing 11 lengths a year ago.

Trained in the United States by Englishman Graham Motion and the mount of Puerto Rican jockey John Velasquez, Animal Kingdom is a globe-trotting phenomenon.

Other leading international challengers include Australia-trained Shamexpress and Shea Shea from South Africa, in the King's Stand Stakes.

Ascot is proud of its ability over the last decade to attract horses from overseas although concerns have been expressed as to whether British and Irish horses are competing on a level playing field after the recent doping scandal highlighted anomalies in the global rules.

Al Zarooni claimed to have been unaware anabolic steroids - which are currently allowed out of competition in countries including the United States and Australia, although were banned in Dubai last month by ruler Sheikh Mohammed - were completely outlawed in UK racing.

Ascot says overseas trainers are quizzed about their use of medication, and Danny O'Brien, trainer of Shamexpress, backs a universal ban on anabolic steroids.

"It's best that Australia gets on board with the UK and Hong Kong and bans them completely," he said,

Royal Ascot and racing in general will be hoping to avoid negative headlines this week, and many will hope Lady Cecil can send out a heartwarming winner from the famed Warren Place stables.

"The team are determined to carry on for Henry," she told BBC Sport at Nottingham on Thursday after Frankel's half-brother Morpheus provided her first victory.

Another four wins have followed from a total of 13 runners, and she has potential favourite Tiger Cliff, the mount of Frankel's jockey Tom Queally, in the Ascot Stakes at 1700 on Tuesday.

Wednesday - Can Camelot bounce back?

After winning the Guineas, Epsom Derby and Irish Derby, Aidan O'Brien's four-year-old has only won one of his last four races and trainer Roger Charlton has indicated Al Kazeem could be aimed at the prestigious Prix de l'Arc de Triomphe in October.

Thursday - One for the ladies

Ladies' Day is always one of the highlights of the week, with the Gold Cup (1545) this year featuring a horse owned by the leading lady herself, the Queen.

Estimate won at Royal Ascot last year, but so did dual scorer Simenon in other races, for Ireland's champion jumps trainer Willie Mullins, and he is one of several interesting challengers alongside 2010 winner Rite of Passage.

The day's feature race, the Coronation Stakes (1545), will see top fillies Sky Lantern and Just The Judge renew rivalry after finishing first and second in the 1,000 Guineas at Newmarket.

And Sir Henry Cecil will be remembered with the Queen's Vase run in his honour.

The curtain will come down on five days of sporting spectacle with the speed test of the Diamond Jubilee Stakes, which was narrowly won by record-breaking Australian mare Black Caviar last year.

She has since been retired to stud, but Sea Siren represents Australia this time while Shea Shea could attempt to double up after Tuesday's outing and 2011 winner Society Rock is a leading home challenger.