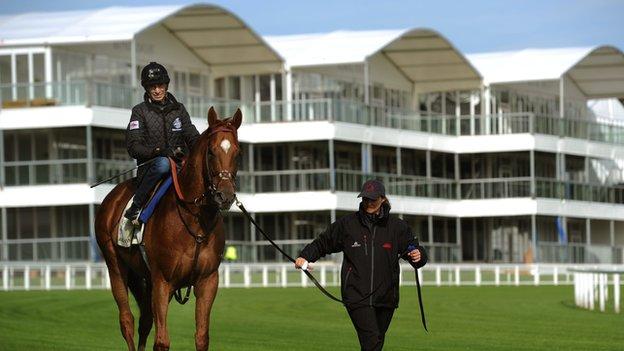 Animal Kingdom will be favourite when he faces 12 rivals in the Queen Anne Stakes at Royal Ascot on Tuesday.

The United States-trained horse, who won the 2011 Kentucky Derby and this year's Dubai World Cup, will be aiming to add an Ascot win to his collection.

It is likely to be Animal Kingdom's swansong race before retiring to stud.

Elsewhere, Dawn Approach, Magician and Toronado will feature in a field of nine in Tuesday's St James's Palace Stakes during the five-day meet.

Trainer Graham Motion, who grew up near Newmarket, is confident Animal Kingdom can cope with any conditions at the Berkshire course.

He told BBC Sport: "It's a huge challenge - there are so many unknowns.

"If [the ground] was to come up soft that would be a concern for me. I think he'll handle it but he's never had to handle it before so it would be one more variable I don't want to deal with.

"It's been a great experience. It's very special and I feel very fortunate to be a part of it."

Dawn Approach, winner of the 2000 Guineas, was most recently seen in the Derby when he finished last.

Irish Guineas winner Magician is expected to recover from a minor injury to race against Dawn Approach and Toronado.

"The result is massively important for all three, and, all being well, it should provide one of the high points of the week," said BBC horse racing correspondent Cornelius Lysaght.