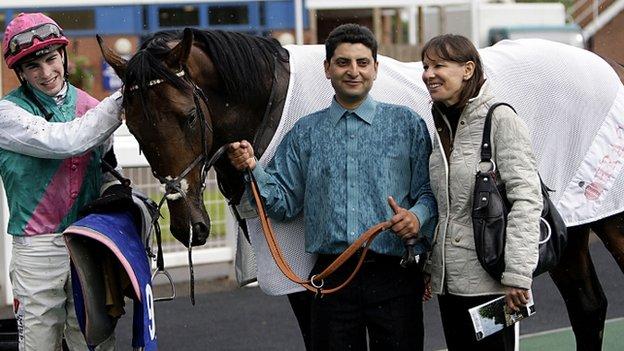 "The staff are determined to carry on for Henry and have winners," she said.

Lady Cecil spoke as it was announced that next week's Queen's Vase at Royal Ascot will be named after Sir Henry.

A minute's silence will also be held ahead of the 21 June race, in which jockeys will wear black armbands as a mark of respect.

"While racing is a sport pored over by statistics buffs, examining times, distances and going, Cecil preferred to rely on instinct rather than stopwatches."

Lady Cecil has temporarily taken over the training licence at Warren Place stables in Newmarket after Sir Henry died of stomach cancer on Tuesday following a long illness.

Five runners were sent out from the yard on Thursday, with several set to run at Royal Ascot next week, including one in the race which will be known as "The Queen's Vase In Memory of Sir Henry Cecil".

"It's such an honour for his family, and a race he has won eight times before," Lady Cecil told BBC Sport.

"He identified Disclaimer for the race straight after he won last time and let's hope it can be a very special day.

"We hope to have a runner each day at Royal Ascot, ground permitting."

Tuesday's opening day of the meeting could see Tiger Cliff run for the Cecil team in the Ascot Stakes.

Lady Cecil said she was grateful for the countless cards and tributes since Sir Henry's death.

"I've had a lot of support and I know it's a cliche, but the cards and letters have been a great comfort," she added.

After the post-race presentation, Lady Cecil listened to commentary of Songbird's triumph on a mobile phone in the winner's enclosure.

"It is lovely to have winners for Prince Khalid Abdulla (Morpheus) and Sir Robert Ogden (Songbird), who have been great supporters down the years," she added.