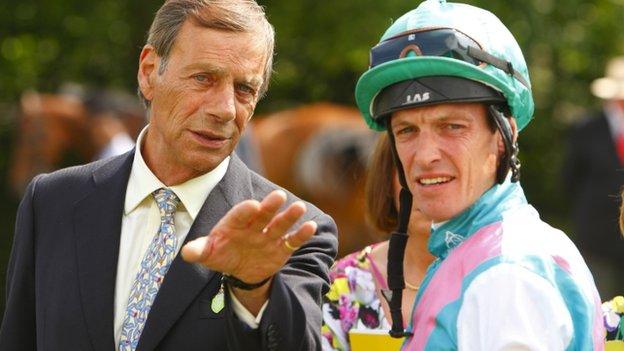 Sir Henry Cecil's funeral will be held in Newmarket on Monday 24 June for family members only, with a service to celebrate his life at a later date.

The 10-time champion trainer died of stomach cancer on Tuesday, aged 70, after a long illness.

His widow, Lady Cecil, has temporarily taken over the training licence at Warren Place stables.

Five runners will be sent out from the yard on Thursday, with several set to run at Royal Ascot next week.

Cecil saddled a record 75 winners at the Royal meeting, and Ascot is discussing the best way of paying tribute to him at the 2013 meeting, which runs from 18 to 22 June.

The first horses to run under Lady Cecil's name will compete at Newbury, Nottingham, Yarmouth and Leopardstown on Thursday.

"She was a very backward filly and Sir Henry didn't want to run her as a two-year-old or a three-year-old.

"I think a lot of trainers would have run her and she might never have won a race, but Sir Henry had a lot of faith in her, took his time and she won first time out as a four-year-old very well."

Lady Cecil runs Phaenomena and Rajaratna, both of whom carry the silks of the Niarchos family, at Newbury.

Morpheus, a half-brother to Cecil's greatest ever horse, Frankel, runs at Nottingham, while Tickled Pink, a four-year-old winner of the Group Three Abernant Stakes at Newmarket, heads to Ireland for Leopardstown's Group Three Ballyogan Stakes.

Tickled Pink's Irish owner Trevor Stewart admits it will be an "emotional day".

"I didn't know Henry all that well, but it's still devastating news and it's going to be an emotional day, especially if the filly can win," he said.