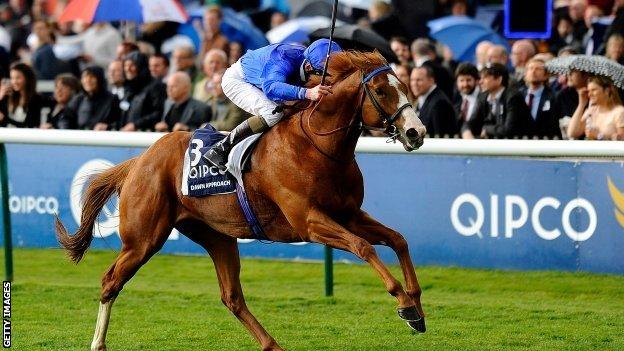 The 2,000 Guineas winner Dawn Approach could be back in action in the St James's Palace Stakes at Royal Ascot after his Derby disappointment.

The beaten Epsom favourite was thought to be an unlikely runner in Tuesday's one-mile race.

But trainer Jim Bolger says the colt, which he co-owns with Godolphin boss Sheikh Mohammed, is set to race.

"Jim has been delighted with how relaxed Dawn Approach has been in his training."

"Subject to a satisfactory piece of work on Thursday, he is an intended runner," said Bolger.

Godolphin's racing manager Simon Crisford added: "Jim is very happy with how Dawn Approach has done since the Derby and he is keen to let him run at Royal Ascot if everything continues to go well with his preparation between now and the race on Tuesday.

"We had a discussion [on Wednesday morning] and decided to let him run if he pleases in his work on Thursday.

"Jim has been delighted with how relaxed Dawn Approach has been in his training."

Dawn Approach is one of 14 confirmations for the Group One contest alongside stablemate Leitir Mor, while the quartet of Irish 2,000 Guineas winner Magician - who will only be confirmed a runner on Sunday if he has recovered from some bruising - Gale Force Ten, George Vancouver and Mars represent Aidan O'Brien.

The Richard Hannon-trained Toronado, fourth behind Dawn Approach at Newmarket, will try for an improvement while the entries are completed by Dont Bother Me, Dundonnell, Garswood, Glory Awaits, Jammy Guest and potential French raiders Mshawish and Mutin.