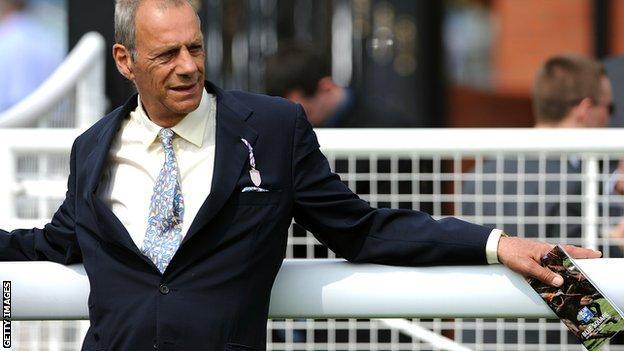 The 10-time champion died on Tuesday - a week before the meeting where he saddled a record 75 career winners.

His licence temporarily passes to his widow Jane, with Frankel's brother Noble Mission, half-sister Joyeuse and Hot Snap set to run for her next week.

"It would be a fitting tribute if one of those won," Queally told the BBC.

But the Irish jockey said the thoughts uppermost in his mind were with the father-of-three Cecil's family and friends.

"At times like this, who cares about horses and racing? This puts everything into perspective. It's a tough time for everybody," said the 28-year-old.

The racing world has been paying tribute to a man regarded as one of the all-time great trainers, who guided the world's top-rated horse Frankel to 14 consecutive victories partnered by Queally.

"As proud as I am of being on board that great horse, I'm even more proud and honoured to have been Sir Henry's jockey," Queally told BBC Radio 5 live.

"Obviously, there was a lot of pressure with Frankel, but he never let you feel as much of that pressure as you should have done.

"He was also a tremendously competitive man and had a will to win like no other man I've ridden for."

Cecil had nine horses entered for the Royal meeting, which takes place from 18-22 June.

Among them are Joyeuse, a two-year-old who won her debut race at Lingfield last month and has an entry in the Albany Stakes.

Hot Snap was beaten favourite in last month's 1,000 Guineas and will seek to make amends with victory in the Coronation Stakes, also on 21 June.

Thomas Chippendale and Noble Mission, who were first and second in the King Edward VII Stakes at Royal Ascot last year, are possibles for the following day's Hardwicke Stakes.

"It would be a poignant moment if it did happen [one of the horses won]. Fingers crossed they run well," said Queally, who followed racing greats such as Lester Piggott, Steve Cauthen and Pat Eddery as stable jockey to Cecil at his Warren Place stables in Newmarket, Suffolk.

"Ascot will really miss Sir Henry. It won't be the same without him."

Cecil, who trained 25 British Classic winners, was knighted in 2011 and battled stomach cancer in his later years.

In an extraordinary career, he excelled with fillies and trained six 1,000 Guineas winners and eight Oaks victors, his last Epsom heroine being Light Shift in 2007.

Among his Leger winners was Oh So Sharp, who completed the fillies' Triple Crown of 1,000 Guineas, Oaks and St Leger.

"Although he was a big deal in racing, he never took himself too seriously," said Queally.

"He was genuinely humble and had time for everybody - he was very approachable.

"How long he battled with his illness goes to show how tough he was. He oozed class, and wasn't afraid to be different."