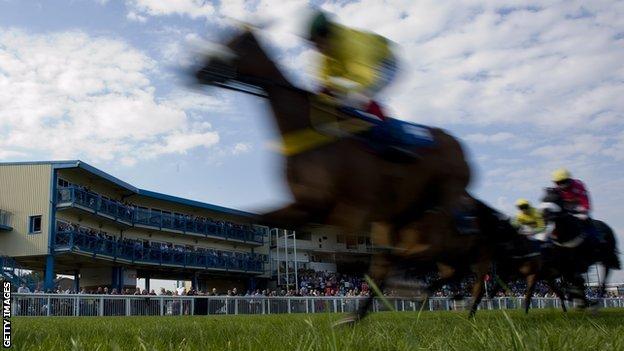 The British Horseracing Authority (BHA) will look into the running of the Jim Best-trained Planetoid after his odds-on victory in a hurdle race at Newton Abbot on Wednesday.

The five-year-old had failed to impress since switching to hurdles last autumn.

But he went off as 5-6 favourite under champion jockey Tony McCoy and won by five lengths at the Devon track.

Course stewards held an inquiry into his improvement and the findings were passed to the BHA.

"Planetoid was a well-backed favourite despite being unplaced in his last nine starts.

"The 18-times champion jockey Tony McCoy was a late replacement for Mattie Batchelor, who failed to arrive due to 'car trouble', according to trainer Jim Best."

"We always liked him when we got him, but his jumping was just terrible," Best said after the win, which was missed by regular jockey Mattie Batchelor as he was unable to get to the course.

"We haven't run him for six months, we've just worked on his jumping all that time and it's paid off. I think he has appreciated the better ground too.

"I feel sorry for Mattie, who couldn't get here, as he has done a lot of the work on him, but it was good to get AP.

"Hopefully he can go on from this now and show himself to be the horse we hoped he would be."

Best said much the same to the stewards, reporting that "the gelding had problems with his jumping last year and has been given a break in order to re-school him over hurdles.

"He further added that Planetoid was suited by this quicker ground and running for the first time in a handicap."

His explanation was forwarded to the BHA and the gelding was ordered to be routine tested.