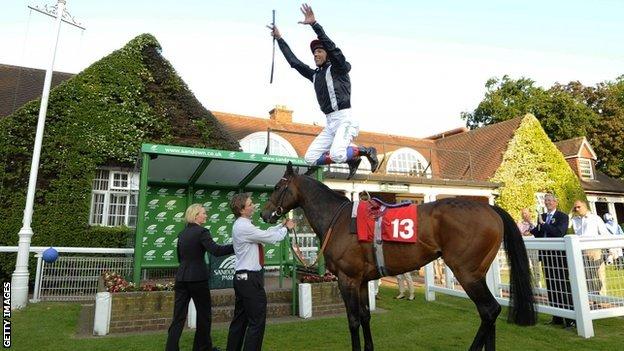 Frankie Dettori claimed his first victory since returning from a six-month drugs ban as Asian Trader won the Lammas Lane Handicap at Sandown.

The 42-year-old Italian made his comeback at Epsom last week on the opening day of the Derby meeting.

He had gone 11 races without a win before guiding 5-2 favourite Asian Trader to victory over five furlongs.

Dettori was banned from racing for six months after testing positive for cocaine at Longchamp last year.

He treated racegoers to his customary flying dismount in the winner's enclosure after beating Alnoomaas, with Gladiatrix in third and said afterwards he felt good.

"I've only been riding five days but I've done a lot of ground work and even since the first day I've never felt out of place," he said.

"I'm very pleased. I thought the first few days I didn't really have very much but today was the day I had some good chances and if I didn't win today I have 10 rides on Saturday and one of them has to win!

"Obviously I was a bit worried on the first day but your adrenalin takes over, it's something you've been doing for 25 years and I've had nearly 20,000 rides so it's not something new to me.

"Fitness-wise I'd done as much as a human could to get fit and now I'm a winner.

"From day one I've had tremendous feedback, not just from the public but from owners and trainers, too.

"I'm very happy, I've started a new challenge and it might not be realistic but I'd like to ride 100 winners, that's what I'm aiming for."

Dettori is riding as a freelance this season after his 18-year association with Sheikh Mohammed's Godolphin racing operation ended in October 2012 before news of his positive test emerged.

He will be hoping to pick up some high-profile rides at the Royal Ascot meeting, which takes place from 18-22 June.

The Milan-born jockey famously rode seven winners on the same card at odds of more than 25,000-1 at Ascot in 1996.

"I don't know about any Royal Ascot rides yet," he admitted.

"Looking from the outside it looks like Ryan [Moore] has three or four to choose from in every race and I'm hoping he picks a few wrong ones so I can get a few of his spares.

"We've still got two weeks and I'm sure something will come up."