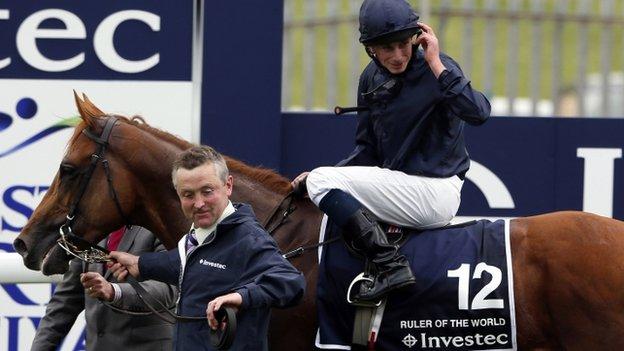 If the ruler of Dubai thought he might finally have a Derby winner in his royal blue Godolphin colours, he was not counting on Ruler Of The World.

Sue Magnier, the wife of Coolmore chief John, picks the names of their blue-blooded colts which are based at Ballydoyle in Tipperary. In hindsight, Ruler Of The World said it all.

"Even before he came to Ballydoyle, he must have been highly rated to be given such a name, and he's always been a stunner with an unbelievable pedigree," said O'Brien as he celebrated his fourth Derby win.

He joked: "With a name like that, I must have been [too] scared to run him as a two-year-old."

Ruler Of The World, the first ever winner of the mile-and-a-half race to wear cheekpieces, beat runner-up Libertarian and third-placed Galileo Rock to become the first horse since Commander In Chief 20 years ago to win the battle of the three-year-olds without having run aged two.

In only his third run, the son of 2001 Derby winner Galileo triumphed under jockey Ryan Moore for O'Brien in a slowly run race which defied expectations of pacemakers testing the favourite's stamina.

Down the field was the vanquished 2,000 Guineas winner Dawn Approach, who like one of the sheikh's other supremely talented horses - Dubai Millennium in 1999 - found the Derby a test too far.

Unbeaten in seven races, the question mark had been whether the Jim Bolger-trained favourite could handle the step up from a mile in the Guineas to the extra half-mile on the rollercoaster Epsom Downs. He couldn't, and finished last of the 12 runners.

"I doubt you will see Dawn Approach again over a mile-and-a-half," said Bolger, who won the Derby in 2008 with the horse's sire New Approach.

"There is nothing proved one way or the other. He just did not settle and run his race - this is not a good outcome."

Aside from the Guineas win and a Group One victory for Farhh, the last six weeks have been a torrid time on the racing front for Sheikh Mohammed.

Godolphin was founded as a thoroughbred operation in 1992 which would showcase Dubai and rack up big-race winners around the world, which it has done.

But in April, one of its two Newmarket trainers - Mahmood Al Zarooni - was banned for eight years after the biggest racehorse doping scandal of modern times.

A total of 22 horses trained by him at Moulton Paddocks in Newmarket were given banned anabolic steroids and are all were suspended from racing for six months.

The Guineas provided a hint of revival, and a Derby win would have been one to cherish, but Coolmore had other ideas.

O'Brien fielded five runners and many pundits expected their outsiders to set a fierce pace which would challenge Dawn Approach's stamina as a crowd of 120,000 revelled in the early summer sunshine.

As it turned out, the race was run at something of a crawl, with the winning time more than five seconds outside the average.

"If we'd wanted to be mischievous we would have done the complete opposite," said O'Brien.

The race was perhaps a case of 'slowly, slowly, catchy monkey'. Dawn Approach was unsettled and faded a long way out while Moore swooped to the front on 7-1 chance Ruler Of The World.

This was a third Derby victory on the trot for owners Sue Magnier, Michael Tabor and Derrick Smith after the French-trained Pour Moi two years ago and O'Brien's Camelot in 2012.

As Sue's husband John, Tabor and Smith shared the top table with O'Brien in a post-Derby news conference, Mr Magnier noted the odd failure too.

Referring to the naming game - and a reference perhaps to horses such as George Washington, who flopped at stud, he said: "We've had a few bad American presidents."

But they knew this victory only enhanced their breeding prestige. "To think he has become a sire of sires is marvellous," said former East End bookmaker Tabor.

Libertarian (14-1) ran well to finish second as Elaine Burke attempted to become the first female to train a Derby winner, 100 years on from the tragedy of suffragette Emily Wilding Davison, who died after running in front of the King's horse, Anmer.

And Galileo Rock (25-1), for David Wachman - the son-in-law of John Magnier - finished a creditable third.

It was Coolmore's day, unlike nearly nine months ago when Godolphin's Al Zarooni-trained Encke dashed their hopes of a first Triple Crown of Guineas, Derby and St Leger victories since Nijinsky in 1970.

That defeat hurt. The fact Encke, who tested clear on the day, was subsequently found to be one of the doped Godolphin 22 probably offered little consolation.

But for now, Coolmore rule the Flat racing world, although there are sure to be other battles to come as the equine superpowers do battle.