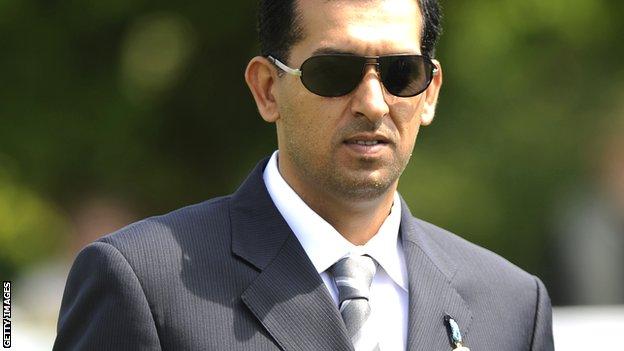 Eleven horses from the Godolphin stable have tested positive for anabolic steroids in one of the biggest doping scandals in British racing history.

Godolphin trainer Mahmood Al Zarooni will attend a British Horseracing Authority inquiry after irregularities were discovered in 11 of 45 racehorses.

"This is a dark day for Godolphin," said stable manager Simon Crisford. "We are all shocked by what has happened."

The 11 horses, who together have won more than $2m (£1.31m) in prize money, include unbeaten Certify, who will not be allowed to run in next month's 1,000 Guineas at Newmarket.

Godolphin is the Maktoum family's private thoroughbred horseracing stable and is overseen by the monarch of Dubai, Sheikh Mohammed, who appointed Al Zarooni three years ago.

This is hugely embarrassing for Godolphin's figurehead, Sheikh Mohammed, the head of the Maktoum family and, as such, the ruler of Dubai. His hands-on approach to Godolphin, the largest stable in the world and one of the few players in racing's premier league, is legendary.

It's constantly emphasised how no decision, from numerous horse purchases to race strategy and tactics, is made without reference to Sheikh Mohammed - 'the Boss'. Indeed, the very fact that most Godolphin horses spend their winters in Dubai is down to his desire to see them on a daily basis, when affairs of state must also be dealt with.

And it's on the back of all this and the much-vaunted sporting nature of the Sheikh and his family, that Dubai has become among the world's great centres for sport and leisure. Yet, apparently right under their noses, perhaps racing's greatest ever drugs scandal has unfolded. Little wonder an urgent review of 'all of our procedures and controls' has now been ordered.

Horses spend the winter in Dubai before transferring to Godolphin's UK stables in Newmarket.

A statement on Godolphin's website said: "Al Zarooni has admitted that he was responsible for the administration of the prohibited substances."

The trainer said: "Because the horses involved were not racing at the time, I did not realise that what I was doing was in breach of the rules of racing.

The substances detected were ethylestrenol and stanozolol. Adam Brickell, director of integrity, legal and risk for the BHA, said: "Ethylestranol and stanozolol are anabolic steroids and therefore prohibited substances under British rules of racing, at any time - either in training or racing."

Al Zarooni won his first British Classic in 2011 when Blue Bunting landed the 1,000 Guineas under Frankie Dettori at Newmarket. The filly went on to claim the Irish Oaks.

Rewilding provided a victory at Royal Ascot and Monterosso won the world's richest race, the Dubai World Cup, in March 2012.

In September 2012, he enjoyed a second British Classic success when 25-1 shot Encke upset Camelot to win the St Leger at Doncaster.

The BHA confirmed that on 9 April this year samples were obtained from 45 horses trained by Al Zarooni at Moulton Paddocks Stables in Newmarket and that the Horseracing Forensic Laboratory had detected prohibited substances.

Certify, unbeaten in four career outings and winner of the Shadwell Stud Fillies' Mile at Newmarket in September, had been ante-post favourite through the winter months for the Guineas, but was one of the seven horses whose sample tested positive for ethylestrenol.

Racing manager Crisford added: "His Highness Sheikh Mohammed was absolutely appalled when he was told and this is completely unacceptable to him. We will await the outcome of the BHA inquiry before taking any further internal action.

"Sheikh Mohammed has instructed me to begin an urgent review of all of our procedures and controls. That is already under way and we will take advice from the BHA in completing it."

No date has yet been announced for the BHA inquiry. However, Brickell said: "The BHA understand the importance of this process being carried out as quickly as possible because of implications for betting markets."