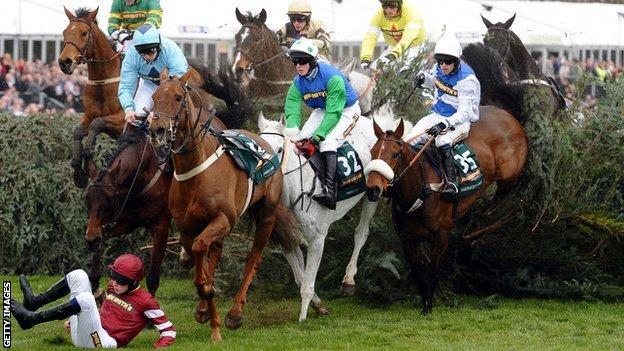 Aintree's redesigned Grand National fences have been welcomed by World Horse Welfare ahead of their full debut on Thursday afternoon.

But concerns still remain over the size of the 40-runner field for Saturday's big race at the Liverpool track.

Two horses have died in each of the last two runnings of the famous race.

Changes to the fences' core material were trialled in December and will be used for the first time at the National meeting in Thursday's Foxhunter Chase.

Outwardly the 16 National fences look the same as last year, with no major alterations to their size and shape, but beneath the spruce dressing, the core of the fences at Aintree are very different.

"We keep the cold north-easterly winds with some early-morning frosts. It will, however, stay dry and bright with decent spells of sunshine with a maximum temperature of around eight degrees, so looking fine for the Grand National on Saturday"

Hidden from view is a new plastic centre replacing the wooden stakes which traditionally supported the structure of the fences. The intention is to make them more flexible and less likely to cause dangerous falls when hit by horses.

Roly Owers, chief executive of World Horse Welfare, told the BBC: "They've made the fences more forgiving and we hope that will have an effect of the number of fallers, because that is our real concern with the National.

"The fatalities are an absolute tragedy but what we do know is that the more fallers there are the more likelihood there is of a serious risk to jockey and horse. So if we can reduce the fallers that will be a big step forward."

The spectacle of the Grand National is still likely to include the sight of horses falling and those who run the race accept that the dangers can never be eliminated.

Reflecting on the changes to the fences, Aintree clerk of the course Andrew Tulloch said: "I think we've got to be realistic. There still will be risks but what we're trying to do is reduce them as far as we can.

"None of us want to see horses injured. Accidents will happen, what we're about is minimising those accidents.

"There was talk about reducing the height of the fences, we haven't done that because perhaps jockeys would go a bit faster. They've got to respect the fences."

Aintree has decided to maintain the size of the field at 40 horses despite calls from World Horse Welfare in particular to limit the race to 30 runners, if only on a trial basis.

Owers believes more falls occur when there are more horses competing against each other, particularly in the early stages of the race.

"Over the last three years, the amount of fallers due to interference is significantly more in the first part of the race than it is for the latter stages," he said.

"We do believe there is a case to be made for reducing the numbers in the National. Do it on a trial basis, see how it works, if it doesn't change the faller rate then nothing is lost but we believe there's a huge opportunity to be gained by it."

However Tulloch believes 40 horses and riders should be able to negotiate the fences.

"We are constantly reviewing things but our view at the moment is that there's plenty of width in these fences and that was endorsed by the jockeys," he said.

"When we've had fewer runners it hasn't always held true that you've had the corresponding reduction in fallers."

The other significant change to this year's race is the start which has been moved away from the main grandstand in an effort to keep horses and riders calm. Last year's Grand National featured chaotic scenes before the race was able to get underway.

The latest alterations follow an extensive review in the build-up to the 2012 race and welfare groups stress that changes must be allowed to bed in over time.