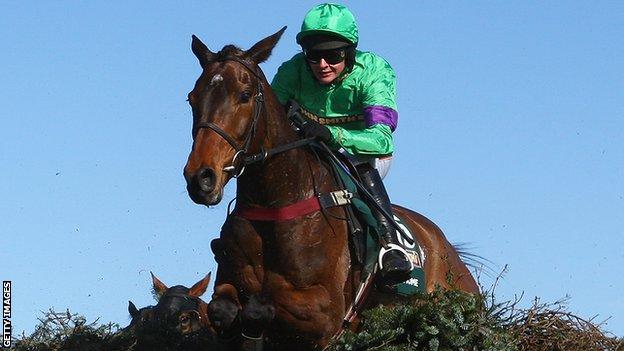 Trainer Venetia Williams said the 13-year-old would spend his retirement at her stables in Herefordshire.

Mon Mome went on to finish third in the 2010 Cheltenham Gold Cup won by Imperial Commander, who is top weight for this year's National on Saturday.

Under jockey Liam Treadwell, he was the first 100-1 shot to win since Foinavon in 1967 and there has been no longer-priced winner in the race's history.

He had not won since his Aintree victory, when he beat previous winner Comply Or Die by 12 lengths, and was pulled up on what turned out to be his last appearance at Warwick on 10 March.

The French-bred Mon Mome won six of his 53 races.

Williams told the Racing Post: "He's been an amazing horse to train and gave me the best day of my career when winning the Grand National.

"He showed a bit of form at Wincanton earlier this year, but has not run anything like that since and we've decided to retire him, as that was going to be the plan at the end of this season anyway."

Treadwell said: "Mon Mome gave me a fantastic day when he won the Grand National, but it was not just that; I was also second on him as a conditional in the Welsh National and at my first Cheltenham Festival I was fourth on him in one of the handicaps, so he meant a great deal to me for all sorts of reasons.

"He was a brilliant horse to ride, a real gentleman, and I owe him a lot."