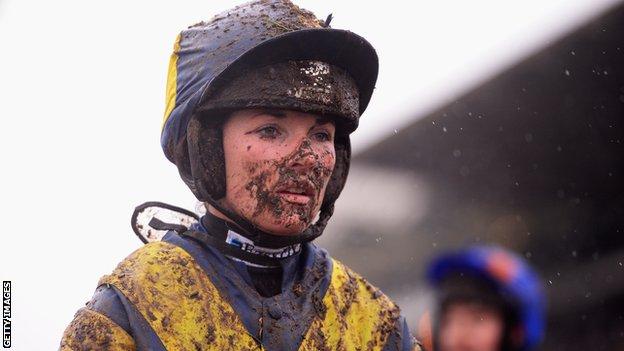 Since a horse called Lottery, the favourite as it happens, won the first Grand National in 1839, the race has become sport's greatest game of roulette.

With a large field, 30 obstacles and a near four-and-a-half-mile course, little is predictable, making it much more a test of punters' lucky streaks than their knowledge of the formbook.

Here, I don't so much offer you tips on which horse will win - though to me Imperial Commander looks tasty - but on a few things to be looking out for on and around the big day.

The need for some Aintree romance

Following the well-documented deaths of two horses in each of the last two years, the Grand National finds itself in the sharpest of focus in 2013 and with a reputation tarnished in some quarters.

There is no doubting its general popularity, with literally hundreds of millions worldwide following their fancies, but equally the race's opponents are more and more vocal.

If supporters and organisers had a magic wand to wave, they would wish for a running free of serious incident, and with a good, old fashioned Aintree fairytale lurking by the finish.

And 30 years after Jenny Pitman became the first woman trainer to lift the famous prize with Corbiere, many believe a female participant might again capture the imagination by taking top honours.

Two that stand out are Rebecca Curtis, trainer of Teaforthree, a contender of some poignancy having been ridden to Cheltenham Festival glory last year by the jockey JT McNamara, who recently suffered paralysis following a serious fall.

The other is Katie Walsh, rider of last year's third-place finisher Seabass.

Seabass and Katie Walsh want to reel it in

Relive the 2012 Grand National, and over the penultimate fence the excitement that a woman jockey might win it at last reached fever pitch as Seabass and Katie Walsh took the lead.

At the final obstacle they were still bang in contention, and were only run out of it in the very closing stages by first Sunnyhillboy and then the eventual winner Neptune Collonges.

After that experience and two promising runs this season, Seabass, trained by Walsh's TV pundit father Ted - who also saddles Colbert Station - is a major fancy.

In 2012, Walsh, 28, became the 15th female jockey to ride in the Grand National since Charlotte Brew made history on Barony Fort in 1977, and Seabass's third place is the best finishing position.

Success would catapult champion jockey Ruby Walsh's younger sister to sports superstardom not only across Britain and her native Ireland, but all around the globe.

That said, the dual Cheltenham Festival winner can be said to know all about Grand National glory having 'led up' her family-trained Papillon when victorious in 2000.

Bookmakers estimate that in excess of £150m will be bet on the Aintree feature, with On His Own likely to jump off as one of the shortest-priced favourites in modern times.

In 2012, the horse, successful in a good quality hurdle race at home in Ireland in February, was moving menacingly when falling at Becher's Brook on the second circuit.

A combination of that form and the fact that he represents top trainer Willie Mullins, and is ridden by two-time winner Ruby Walsh, makes On His Own irresistible for many punters.

Williams fancied to win - at last

South Wales-based Evan Williams has a pretty remarkable Grand National record having saddled just six runners, of which four have ended up 'in the frame'; the other two didn't get round.

Hopes are high, however, that Cappa Bleu, one of those fourth places when rather luckless and beaten by 12 lengths in 2012, can provide the horsepower to finally put this Williams team on the winners' podium.

The encouragement comes from last year and from a fine effort when runner-up in a decent race at Ascot in February, with fellow Aintree hopefuls Saint Are and The Rainbow Hunter just behind.

The trainer reports Cappa Bleu's build-up to the big race has gone according to plan, and stable jockey Paul Maloney will again be on board.

Meanwhile Williams's Grand National stalwart State Of Play, whose race statistics read fourth, third and fourth before unseating his rider early on in 2012, has been retired.

Talking of stats, all of the Welsh-trained runners have to overcome history because there has been no winner trained in Wales since Kirkland, the sole one to date, in 1905.

Nigel Twiston-Davies, the only current trainer to have won two Grand Nationals, with Earth Summit (1998) and Bindaree (2002), looks for a third with top-weight Imperial Commander.

Twiston-Davies's jockey son Sam is due to take the place of the suspended Paddy Brennan on the 12-year-old, the winner of the 2010 Cheltenham Gold Cup.

Back from a long period of injury, Imperial Commander was primed to try to regain his Gold Cup in March but was then forced to miss the race because of ill-health.

Supporters, however, believe that turn of events could ultimately be a blessing in disguise.

Younger legs might well have found out the veteran at Cheltenham but his experience, quality and sure-jumping are ideal for Aintree, and will help to cancel out the weight burden.

Only one horse has completed the Gold Cup/Grand National double in the same season - Golden Miller (1934) - but Imperial Commander attempts to emulate 1975 winner L'Escargot, who had won the Gold Cup twice in previous years.

Sir Alex Ferguson loves to win on Merseyside, and not just when Manchester United are playing Everton or Liverpool.

His horse, What A Friend - pulled up in the 2011 Grand National - had helped to ease the pain of being knocked out of Europe by Bayern Munich a year earlier when winning Aintree's Bowl Chase the very next day.

Memorably, Ferguson was in the winners' circle, all smiles, hailing the success as a "great release from the grind of football."

What A Friend, trained by Paul Nicholls, is due back at the Aintree Festival this year - though his target isn't yet confirmed - along with Ferguson's Harry The Viking, also under the care of Nicholls.

Both will be outsiders in the Grand National but they won't be lacking support from the owner.

While the 2012 Grand National winner Neptune Collonges - a first success in the race for champion trainer Paul Nicholls - is now retired, most of the horses directly behind him are expected to return.

Sunnyhillboy, the narrowest beaten runner-up in history (margin: a nose) is joined by Seabass (third) and the fourth-placed finisher, Cappa Bleu.

The 2011 winner Ballabriggs, sixth behind Neptune Collonges, is back too, heading a characteristically-strong team from the stables of trainer Donald McCain, son of race legend 'Ginger'.

Supporters of well-fancied Chicago Grey will hope for better luck, having been brought down 12 months ago.

Also returning after missing 2012 is old favourite Big Fella Thanks, who's been sixth, fourth and seventh in the past.