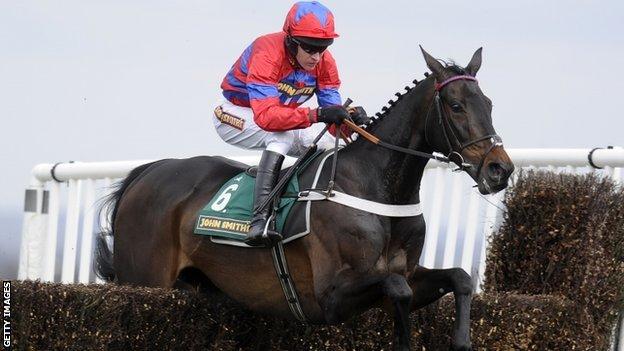 Champion chaser Sprinter Sacre made it nine wins in a row over fences with victory in the Melling Chase at the Grand National meeting.

The 1-3 favourite was eased stylishly around the Aintree course by jockey Barry Geraghty as he stepped up to two-and-a-half miles for the first time.

He looked in good form as he went past Cue Card on the run to the last fence.

Cue Card had run his race by then and Sprinter Sacre triumphed by four-and-a-half lengths.

The Irish hope Flemenstar, who missed the Cheltenham Festival, saw his challenge disappear three fences from home and was third.

Sprinter Sacre, who has been called National Hunt's Frankel, came into the race on the back of a 19-length win in the Queen Mother Champion Chase, which is run over two miles.

But the gamble to run the horse over the longer distance for the first time paid off in superb style for trainer Nicky Henderson.

He was never far away from Ryanair Chase winner Cue Card and Flemenstar who disputed the lead throughout and once Geraghty asked him for an effort he was no match for his rivals.

"He was brilliant. I suppose I could have done with going a little bit quicker," said the winning jockey afterwards.

"He travelled a bit too well and I had to take him back a few times to make use of his jumping. Because of the distance I didn't want to get to the front too soon.

"He was more relaxed than at Cheltenham, but we didn't go quick. The two and a half miles didn't make any difference. He has plenty of pace and is very versatile."

Henderson added: "He's just a natural athlete. He's got a huge amount of ability and knows how to use it.

"I don't think anybody has taught him about jumping. It is sheer natural talent and it's good to watch when it's over.

"As Barry says that is probably as far as he wants to go. He gets two and a half but he doesn't need any more. It gives him options."

Henderson was not completely ruling out a quick return at Punchestown on 23 April, adding: "I'm not ruling it in or out, I sort of think I'd like to show him to the people in Ireland one day.

"He's not had hard races has he? Let's see how he comes out of this."

Geraghty went on to complete a quick-fire double and give Henderson a third win of the day after the success of My Tent Or Yours in the Top Novices' Hurdle when Triolo D'Alene (14-1) won the Topham Chase over the Grand National fences beating Walkon (16-1) into second place ahead of Last Time D'albain (16-1) and Dunowen Point (33-1).