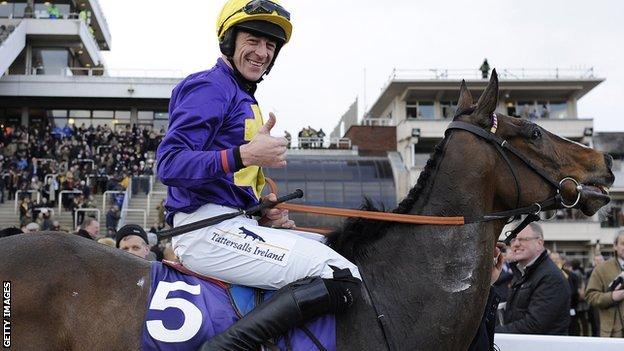 Irish jockey Davy Russell will miss the Grand National meeting at Aintree after failing to gain medical clearance from the British Horseracing Authority.

Russell suffered a heavy fall in the Coral Cup at Cheltenham on 14 March.

The 33-year-old returned to action the next day but was taken to hospital after two rides, where it was revealed he had suffered a punctured lung.

He has received clearance to ride in Ireland, returned at Cork last week and has four rides at Fairyhouse on Sunday.

But Russell revealed to RTE Radio 1 that he would not be allowed to ride in Britain, where the three-day National fixture starts on Thursday, 4 April.

His agent Andrew 'Frosty' Kelly said: "He went to London on Thursday to see the BHA's specialists and they just wouldn't pass him.

"He's ridden since the injury, is riding tomorrow (Sunday) and feels 100% - he was really looking forward to going over to Aintree.

"It seems a strange decision but Dr (Michael) Turner just wouldn't pass him.

"His ride in the National was still to be confirmed but he'd have been on the likes of Solwhit (Aintree Hurdle) and Quito De La Roque (Betfred Bowl) so he's missing some nice rides."

Explaining the BHA's position, director of raceday operations and regulation Jamie Stier said: "The BHA places rider safety as a top priority, and because of this Davy Russell's condition has precluded him from race riding in Britain under the terms of the BHA Standards of Fitness to Ride.

"The Standards are very clear on this specific condition as it may recur at any time and could form a potential risk to himself or other jockeys.

"Understanding the unique circumstances surrounding the timing of the approaching Grand National meeting - at which Davy, connections and the betting public would have been expecting to see him ride - we instigated a process of obtaining a second opinion on this matter.

"Davy met an independent consultant thoracic surgeon as well as a member of the BHA's Medical Review Panel in London on Thursday, who both also recommended that Davy should not be eligible to ride in Britain at this time.

"Ultimately the decision was taken by the Licensing Committee to uphold their recommendations.

"This process was carried out in as fast a manner as possible in order to ensure a resolution could be reached well in advance of the Grand National meeting, for the benefit of both the rider and betting public.

"We are aware that the Turf Club [in Ireland] has given Davy approval to ride. However, as with many regulatory areas, there are variations between authorities and it is not surprising that different jurisdictions might have different views on this case."