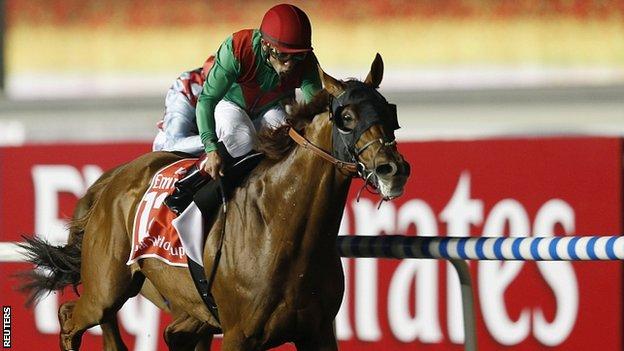 Ryan Moore and Planteur were third with the Andrew Balding-trained Side Glance fourth in the 10 furlong Flat race.

Defending champion Monterosso, owned by Dubai ruler Sheikh Mohammed, was declared lame on the day of the race.

Jockey Joel Rosario and Animal Kingdom tracked top US mare Royal Delta, ridden by legendary US jockey Mike Smith, in the early stages before making his move two-and-a-half furlongs out.

Gerald Mosse and Red Cadeaux (28-1) swooped late on the rails but Animal Kingdom, an 11-2 shot, was long gone and won by two lengths on the synthetic track.

Animal Kingdom could make a final appearance at Royal Ascot in the summer before beginning a breeding career in Australia.

"It has been up, down and up and down with this horse," said co-owner Barry Irwin.

"I always thought he had another great race in him and it almost came in the Breeders' Cup Mile last year but it has certainly come true here."

Ridden by O'Brien's son Joseph, the six-year-old struck entering the back straight to win by two-and-a-quarter lengths.

O'Brien senior said: "He's obviously a very high-class horse and I think I was wrong in holding him up in some of his races.

"Gentildonna is obviously a very high-class filly and I thought she was going to put us under pressure, but our lad found extra.

"He's in great shape and remember he was a top two-year-old who won the Racing Post Trophy but then lost his form at three.

"To come back like he has to be a top middle-distance horse is a credit to him."

On future plans, O'Brien added: "I suppose he could go back to Epsom for the Coronation Cup, but we will have to see."