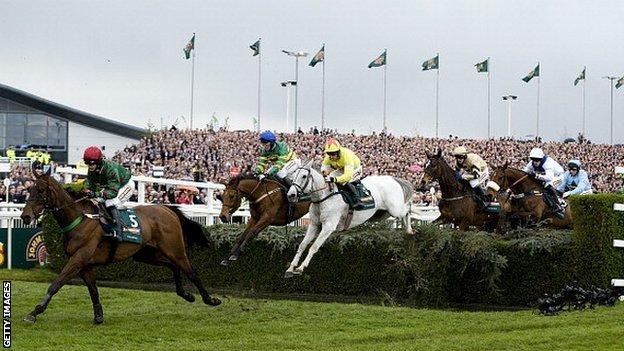 "He will require at least six weeks' box rest so will miss the Aintree Grand National," said Mullins.

The horse was an 8-1 joint favourite alongside stablemate On His Own, who is now clear market leader.

Beshabar has also been declared a non-runner by Welsh trainer Tim Vaughan because of a fetlock injury.

It is the second year running Prince De Beauchene has been a late withdrawal in the build-up to the race. He was ruled out with a hip fracture in March 2012.

The two absentees leave 55 runners left in the famous race, which has a maximum field of 40.

Several more may drop out at Monday's five-day declaration stage, with the final line-up known on the morning of Thursday 4 April, which is the first day of Aintree's three-day National meeting.

Mullins still has a strong hand to play in the race, which sees runners negotiate 30 fences over a distance of nearly four-and-a-half miles.

The County Carlow trainer, who triumphed with Hedgehunter in 2005, saddles favourite On His Own, who was trimmed to 7-1 by bookmakers after his stablemate's withdrawal. On His Own is owned, like Prince De Beauchene, by Graham Wylie.

Ruby Walsh, a winner on both Hedgehunter and also Papillon for his trainer father Ted five years earlier, is expected to ride On His Own although he has the pick of runners from the Mullins stable and English champion trainer Paul Nicholls.

Nicholls won the race for the first time in 2012 when the grey Neptune Collonges beat Sunnyhillboy, trained by Jonjo O'Neill, by a nose. The race saw two equine fatalities including the runner-up's stablemate - the Cheltenham Gold Cup winner Synchronised.

The 2013 contest is shaping into a Walsh family affair, with second favourite Seabass - trained by Ted - set to be ridden by Ruby's sister Katie.

She finished third on the horse last year, the best finish ever in the race by a female jockey.

Ted also has Colbert Station, owned like Sunnyhillboy by JP McManus who employs 17-time champion AP McCoy as his jockey.

Sunnyhillboy missed this year's Gold Cup on 15 March as he was reported to be not 100 per cent, but is expected to be fit enough for Aintree.