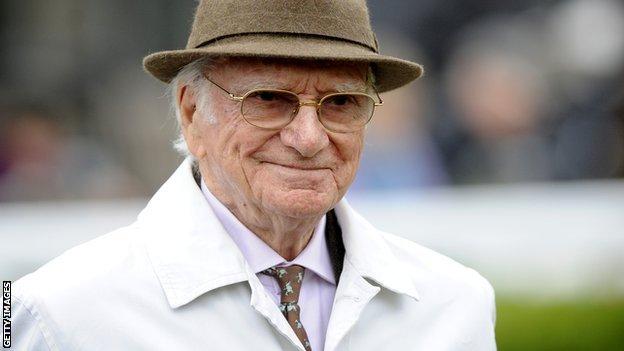 The 95-year-old is recovering well in London's Charing Cross Hospital.

Nigel Payne, chief executive of the Peter O'Sullevan Charitable Trust, said: "He is much better. I spoke to him at length last night. It's very encouraging."

Sir Peter, who commentated on 50 Grand Nationals for the BBC, retired in 1997.

He has enjoyed good health into his 90s and drove himself to the Prix de l'Arc de Triomphe meeting in Paris in October 2012.

Although he is making good progress, he will not be fit enough to go to the 2013 National meeting, which takes place at Aintree from 4-6 April.

His close friend Mike Dillon, PR director for bookmaker Ladbrokes, said on Wednesday: "He is fine. They are doing tests on him and he has improved today.

"I would think there is every possibility he'll be discharged tomorrow. They are pleased with the improvement he has shown and his vision which was impaired and was the main cause for concern has improved dramatically."

Affectionately known as "the voice of racing", Sir Peter began commentating for the BBC in 1948 and called the Grand National for the 50th and final time in 1997, a race won by Lord Gyllene and delayed two days after an IRA bomb threat caused Aintree to be evacuated.

He closed his career with Suny Bay's victory in the Hennessy Gold Cup at Newbury.

Also a successful racehorse owner and journalist, he was knighted in 1997 and in the same year the passionate supporter of animal welfare set up his charitable trust, which has since raised more than £3m for animal and racing-related charities.

Sir Peter is due to have further tests on Wednesday but Dillon added: "He's been for a walk round with the physio.

"Peter was in good form, and the staff are hopeful he'll be able to go home on Wednesday or Thursday."