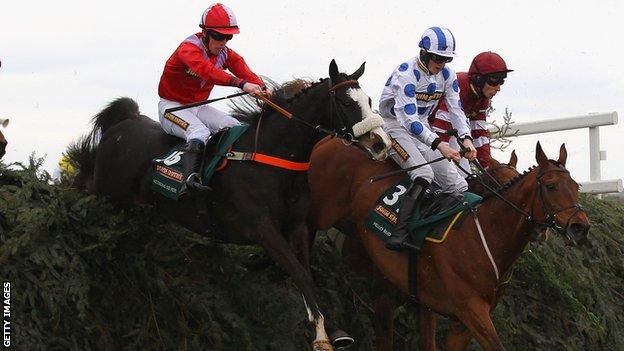 Jockeys in the Grand National are being urged to curb their speed and keep calm at the start of the race.

This year's contest at Aintree, on Saturday 6 April, comes after two horses died in each of the last two runnings.

Riders are being told to be calm at the beginning of the race and that false starts "create an awful impression."

"We are all ambassadors for the race," said a note issued by the racecourse and Professional Jockeys' Association.

"We all need to savour the day and together you can do your profession and our sport proud."

Twenty horses have died in races over Grand National fences since 2001. Ten have died in the race itself in the last 12 years

Changes already announced for this year's race include shortening the distance to four miles and three-and-a-half furlongs from four-and-a-half miles and changing the core of fences - which are dressed in spruce - from wood to a more forgiving, flexible plastic material.

After last year's race, in which According To Pete and Cheltenham Gold Cup winner Synchronised died, the British Horseracing Authority wrote to all 40 riders in the race expressing its disappointment at the jockeys' conduct at the start.

There were two false starts and jockeys breached rules by not abiding to instructions on lining up.

The advice for this year includes the following: "The start has been moved forward 90 yards to create a quieter environment and hopefully reduce the tension for all concerned.

"The line will be well back from the tape and jockeys will be requested to line up at or on the line, prior to the starter starting the race."

Runners haring off at high speed is considered a contributory factor to statistics which show that on average, more than half the falls in the 30-fence National occur in the first 90 seconds of a race which lasts more than nine minutes.

Riders are also urged to remember that they should use the full width of the course to avoid crowding around the inside line.

While jockeys accept they have a public responsibility, privately some are concerned continued changes could cause more problems.

A shorter trip might encourage horses and riders to go faster, and create new problems.

And there is an argument that any more tinkering with the race will mean it is no longer the kind of spectacle which traditionally attracts more than 500 million television viewers worldwide.

Aintree and the PJA point out that the 2012 runner-up Sunnyhillboy, who lost by just a nose to Neptune Collonges, was the slowest runner to the first fence.

The 2013 contest is being broadcast on Channel 4 TV for the first time after the BBC lost the rights, although the corporation will be covering the event comprehensively on radio and online.