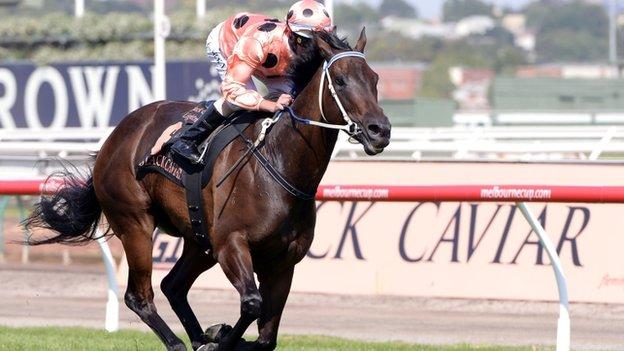 It's bad enough that the 2013 Flat racing season has started with most of Britain's racecourses and gallops blanketed in snow.

The unexpected blast of winter has added to the sense that in this post-Frankel era, the campaign ahead stretches long and stamina-sapping, a touch light on star quality.

But then from 'a lovely 20 degree' Melbourne, Australia, up pops Peter Moody, trainer of Black Caviar, the 'Wonder from Down Under', with news to warm the iciest of British racing hearts.

By the sound of it, the odds have shortened that the Aussie superstar mare, the winner of 24 from 24, will return to Royal Ascot in June, where she took Golden Jubilee Stakes glory last summer.

Moody indicated that key to this global trip is none other than the unbeaten Frankel himself, now a stallion at Banstead Manor Stud, Newmarket.

"There's a strong, concerted push for her to be bred to Frankel," Moody told the At The Races TV channel.

"She would run at Royal Ascot and stay to be covered by Frankel, southern hemisphere time. I don't think it'd be a silly mating; physically they are quite well matched.

"It would certainly create a hell of a lot of interest: a foal by Frankel, out of Black Caviar would be quite something."

Going on to mention "unfinished business", a reference to Black Caviar's only narrow 2012 success, when jockey Luke Nolen apparently mistook the finishing line, Moody added: "Personally, I think Australian racing really deserves her, but at the end of the day if the owners choose to go down that path [to Royal Ascot] it's their choice.

A meeting between the five owners to make a decision about the future is expected before the end of the month. If they came, this time it would be for the five-furlong (1000m) King Stand Stakes.

At Banstead Manor, when I spoke to managers in February, they were very positive about such a mating, and there are unlikely to be any practical problems about fitting in with southern hemisphere timings.

It's standard practice for Australian mares to be brought to Europe to be 'covered' by stallions between August and October to fit in with their mating season.

And what an exhilarating potential knock-on effect: theoretically, Black Caviar would be available for the July Cup, Newmarket and Nunthorpe Stakes, York before meeting Frankel.

The mare is the outstanding female sporting star in Australia, drawing sell-out crowds, earning acres of news print and big TV and radio coverage, all topped up with her own line in merchandise.

She is normally unbackable (33-1 ON for her latest win, a 14th at Group 1 level) but supporters love to have a bet, not to make any money, but simply so they can take the slip home as a souvenir.

That standing became utterly infectious on the fifth and final day of Royal Ascot last summer.

A repeat visit to Britain would be a major day for international sport let alone racing. Let's hope it can happen.

As for the product of any union between the world's two great racehorses of the time, he or she would become the most talked about foal perhaps ever, with a barely imaginable value.

Even though there is no certainty at all, of course, that they'd be any good.