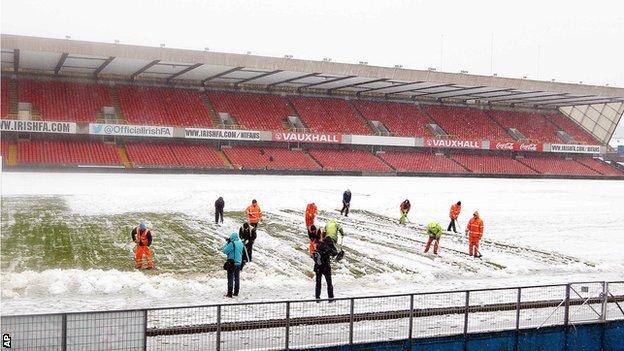 Northern Ireland's World Cup qualifier with Russia at Windsor Park has been called off due to snow.

The game on Friday until 15:00 GMT on Saturday.

Games in Scotland have also been affected by the weather.

Doncaster Rovers Belles against Chelsea Ladies in the Women's Super League is off.

In Belfast, volunteers helped clear snow off the pitch to try to get Northern Ireland v Russia on but the match was called off at 11:00 on Saturday.

A new date will have to be agreed for the Russia game, but the immediate concern now for the Irish Football Association must be their qualifier against Israel at Windsor Park on Tuesday night.

The weather forecast looks bleak for the next few days and there must be some doubt over whether that game will go ahead as planned.

Racing at Doncaster and Newbury was called off after morning inspections. Officials will now aim to run the Doncaster programme, which includes the William Hill Lincoln, on 30 March.

Bangor, Kelso and Stratford were called off on Friday but racing is expected on the all-weather circuit at Southwell.

Clerk of the course at Doncaster, Roderick Duncan, called off the card following an inspection at 06:00 GMT.

He said: "We have had about two to three inches of snow overnight and it's still falling now. Daytime temperatures are forecast to stay at or below freezing."

Sunday's meeting at Wincanton is expected to go ahead after the track passed an 08:00 GMT inspection on Saturday despite heavy rain in the region.

Friday night's Super League game between Wakefield and Leeds has been postponed until Sunday.