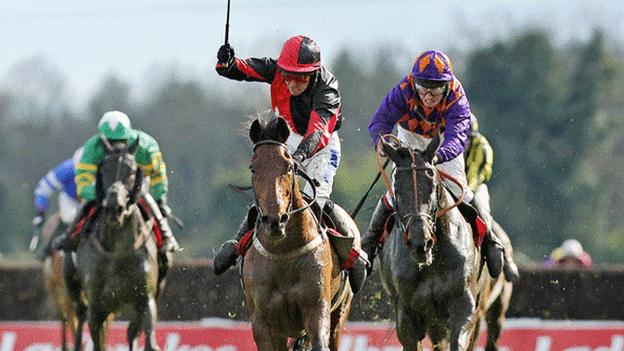 Trainer Tom Gibney said: "He's not fully fit and it hasn't been perfect. He's a very fit horse naturally, but I'd say now it's 50-50 for Aintree."

Albertas Run, The Package and Alfie Sherrin are among 16 horses withdrawn at the latest declaration stage.

Roi Du Mee, Midnight Chase, Calgary Bay and Planet Of Sound are others not now being considered for this year's race.

Lion Na Bearnai was a 33-1 winner by four-and-a-half lengths in the Irish National at Fairyhouse last April but has been beset by health problems since.

He has run only once subsequently - in the Hennessy at Newbury on 1 December - when he was unable to complete the race.

"He's good, he's still heading for Aintree just about, but things have not gone to plan and he's missed a lot of time," Gibney explained.

"He's done a couple of bits of work recently and is coming together, but whether we get there I don't know.

"We thought he was OK for the Hennessy but it turned out he wasn't so then he needed more time off.

"Then he had trouble with a hind leg, it gives him trouble once a year every year, it's a weak spot. That was before the Bobbyjo which was supposed to be his prep race and then there was a bit of ringworm in the yard. He's had everything bar the plague."

"The weights are going to go up and he would end up with nearly top-weight, so he'll probably run in the (Betfred) Bowl on the Thursday of Aintree instead," Murphy said.