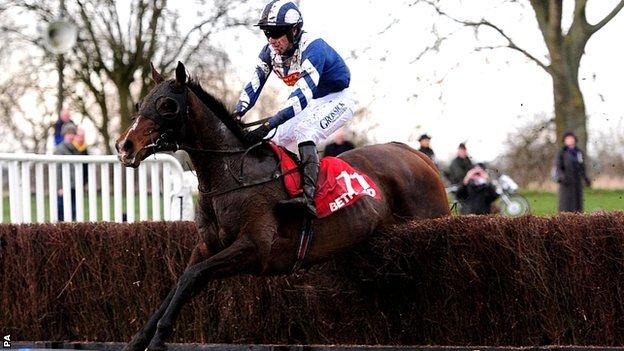 Big Occasion gave David Pipe a hat-trick of wins in the Betfred Midlands National as the trainer put a winner-less Cheltenham Festival behind him.

Amateur rider Mikey Ennis earned the win at Uttoxeter by six lengths from Rebeccas Choice and One In A Milan.

Big Occasion took charge after joining the leaders with four fences to jump.

Last year's runner up, Major Malarkey, was pulled up and Pipe's winner of 12 months ago, Master Overseer, could not cope with weight of 11st 7lb.

Pipe said: "(Big Occasion) had been running on the Flat for Aidan O'Brien and he hadn't been running that well in the first half of the season.

"We changed the way we were training him. I wasn't sure he'd get three miles, let alone four. He was given a great ride by Mikey Ennis and it's a great win."

Ennis added: "As soon as I got in among horses he was tanking with me. I was trying to settle him and didn't want him to do too much because he was travelling too easily.

"He's done it well and stayed every yard of it."