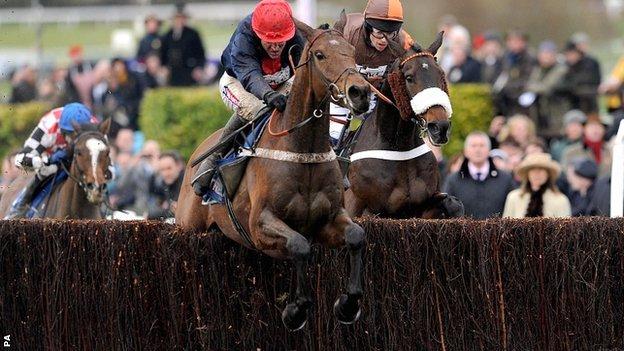 Favourite Bobs Worth gave trainer Nicky Henderson a landmark triumph with victory in the Cheltenham Gold Cup on a day of highly charged emotions.

Barry Geraghty guided the 11-4 chance through in the latter stages for a stirring seven-length victory from runner-up Sir Des Champs and third Long Run.

He is such an honest horse, he always gallops up the hill

"It was brilliant," Geraghty told BBC Radio 5 live. "He is such a great little horse who just loves the job.

"We had faith in the horse. Nicky Henderson knew he would have him fit enough - he knows how to get them ready for Cheltenham."

It was the 50th Festival win for Lambourn trainer Henderson, who passed the all-time record for victories at the meeting last year.

Amateur jockey Sam Waley-Cohen made the running on the 2011 winner Long Run and did battle with champion AP McCoy on Irish challenger Sir Des Champs, before Geraghty pounced.

Silviniaco Conti, ridden by Ruby Walsh for trainer Paul Nicholls, looked another likely to challenge before falling at the third-last fence.

Racing took place with jockeys hoping for positive news about their

Four hours before jump racing's showpiece, it was announced the Irish rider - at the Festival on Thursday - was having surgery in hospital for a fractured spine.

"It's hard to be happy on a day like today," said McCoy after claiming his first winner of the week on At Fishers Cross in the Albert Bartlett Hurdle, immediately preceding the Gold Cup.

Scottish jockey Campbell Gillies, 21, had won the race a year earlier on Brindisi Breeze but both horse and jockey died in separate freak accidents later in the year.

McCoy was a late call-up for the ride on Sir Des Champs, trained by Willie Mullins, and the 17-time champion took on the part-time rider as the two leaders rounded the home turn.

At one stage it looked like being a straight duel between the pro and amateur, but Geraghty stalked from afar and brought Bobs Worth charging up the rain-softened hill for a memorable triumph.

Henderson had previously won the Gold Cup with Long Run, while Geraghty was victorious in 2005 on Kicking King.

Mullins must wait for his first Gold Cup win, while two-time King George VI Chase victor Long Run was making the frame for the third year running, and still has not been out of the first three in his career.

"It has been a long old week," said Henderson. "Both boys gave them great rides and both horses were brave to the line.

"It is dreams, isn't it? Barry Geraghty gave that a lovely pace. It has been a long wait as neither horse has run for a long old time. He is such an honest horse, he always gallops up the hill."

"The Gold Cup engendered a real feeling of a new era for steeplechasing.

"The first four home are respectively aged eight, seven, eight and eight, while the seven-year-old Silviniaco Conti was bang there when coming down at the third-last obstacle.

"There is masses of talented youth at the top of the tree, perhaps yet to reach their peak. The first two home, Bobs Worth and Sir Des Champs, are the most significant, having been the top novice chasers at the 2012 Festival, and now they have neatly progressed.

"The 2014 Gold Cup is clearly a long way off, but assuming most of the above make it that far, plus one or two more emerge, another golden period beckons."

Geraghty added: "I'd love to be happier. All we can think about is John Thomas McNamara. We just hope and pray to God he's OK."

Earlier, jockey Barry Cooper - who had been beaten to the Sir Des Champs substitute role by McCoy after the Northern Irishman's original mount Sunnyhillboy was withdrawn - was successful in the opening two races.

Cooper breezed to a breathtaking 15-length romp in the Triumph Hurdle on Our Conor, trained by Dessie Hughes, before scoring in the County Hurdle with Ted Veale for AJ Martin.

McCoy, who had drawn a blank going into the fourth and final day, completed a double when riding favourite Alderwood to victory, for trainer Thomas Mullins, in the Grand Annual Chase, in a 1-2 for owner JP McManus with Kid Cassidy second.

It was a record 14th Irish-trained winner, and the first time in Festival history horses from the Emerald Isle had outpointed their British rivals.

Salsify was one of them, the favourite winning the Foxhunter Chase for the second year running in the most dramatic of circumstances, after on the run-in.