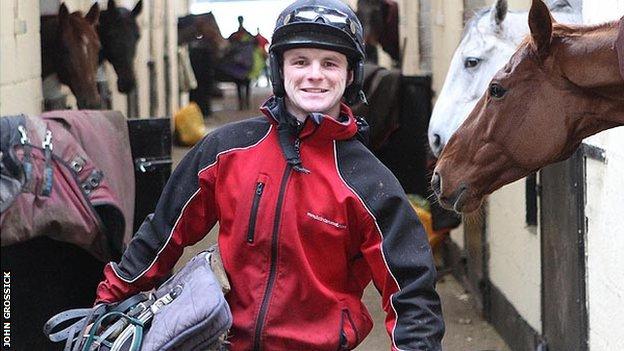 The late great Irish punting priest Father Sean Breen would refer to the Cheltenham Festival as a roll call - "you find out who's still with us, and who's not".

On his annual pilgrimage, along with thousands of countrymen, he would bump into old friends and new at the jump racing carnival that starts on Tuesday and welcomes 230,000 paying spectators over four days.

Father Breen - or the Breener as his pals called him - knew that away from the carefree carousing of winning and celebrating, there is sometimes the untouchable pain of loss.

Few losses can be more significant than the death of your own child. You are not supposed to outlast them, after all.

Lesley Gillies knows that pain, although she pricks it like acupuncture needles with happy memories of her fun-loving son Campbell, who was a winner at the Festival for the first time 12 months ago.

Jockey Campbell raised his arms, beamed a wide smile and drank in the cheers of 50,000 race goers, and millions following elsewhere, after guiding the Lucinda Russell-trained Brindisi Breeze to victory in the Albert Bartlett Novices' Hurdle.

The young rider may have joked to his mum that his greatest win was being voted best-looking jockey on Ladies' Day at Hexham racecourse, but this is what he lived for.

A Scottish rider on a Scottish horse for a Scottish trainer. The Tartan racing army enraptured.

What a difference a year makes.

First in May 2012, Brindisi Breeze jumped out of his paddock in the early hours, bolted the yard and was killed after being hit by a fuel tanker.

The following month, his jockey died on the day before his 22nd birthday in a swimming pool accident on holiday in Corfu with friends.

He had been swimming in the hotel pool with two friends at about 08:00 after they had been out drinking following their arrival on the island in the early hours. A Greek coroner recorded death by drowning.

There were 300 mourners packed inside the church at his funeral, and another 300 who listened via a speaker outside.

"Campbell was scared of horses until he was 12 and had only ridden two when he went to the British Racing School in Newmarket, but they saw something in him, and he was just driven," said his mother, from Haddington, East Lothian.

He progressed at Lucinda Russell's yard and matured as a rider under the tutelage of her partner, former eight-time champion jump jockey Peter Scudamore.

Campbell was behind Peter Buchanan in the pecking order at the stable but rode Brindisi Breeze in his first race and showed calm under pressure to keep the ride. Cheltenham was his destiny.

"He knew he'd win. He was very confident," said Lesley, a teacher who watched from home because of work commitments at her school.

She had seen him ride at the Festival though, on Lie Forrit, which she part-owns. The horse, trained by William Amos, was ninth in the 2010 World Hurdle.

That sense was underlined by the success of Brindisi Breeze at Cheltenham, having been given a masterful ride by his jockey.

It was truly a joyous occasion, a first win at the showpiece event for both the popular and colourful Gillies and for trainer Lucinda Russell, who provided many of his winners.

But barely three months later, neither jockey nor horse was still with us, Brindisi Breeze himself having died in a road accident in May.

Stunned was the only word to describe the feeling right across the sport at this tragedy.

Like many who knew Campbell, Lie Forrit hasn't been quite the same since the death of the jockey. He had ridden him in all his races - seven wins from 15 starts.

"Lie Forrit just seems a bit lost. He's had three different riders, and we are just going to give him a break now and maybe nurture him back into training," said Lesley.

The horse, at nine, potentially has at least two seasons left in him and might make it to Cheltenham in 2014.

"It would be quite a story," Lesley acknowledges.

It could even be her nephew, amateur jockey Hamish McNeill, who rides. The chances of it happening might be 100-1, but those were the odds when Lie Forrit won his first race for Campbell.

And so to Cheltenham 2013, where Campbell will be remembered on Gold Cup day on Friday when young Irish singer Mark Boylan performs a tribute to the jockey on stage in the parade ring before racing starts.

Trilby-wearing Boylan is only 15 but is fast becoming as much a Cheltenham institution as jockeys like Ruby Walsh, AP McCoy and Barry Geraghty.

The teenager's Festival ditty about the big meeting two years ago was a viral hit on YouTube and he played it to clapping jockeys in the weighing room at Cheltenham.

"I'd never heard of Mark and then Campbell's friend, [fellow jockey] Zander Voy, said he used to drive him mad playing his songs in the car. They would be on repeat going to the races," said Lesley.

"Campbell was a full-on person. If he liked something, he liked it constantly.

"I have mixed feelings about Friday. It will be an emotional day but we will try our very best to celebrate Campbell's life."

Boylan demonstrated a maturity beyond his years as he spoke to some of those riders, and relatives, to paint a picture in song of Campbell - who he had never met - before penning the ballad.

"It was a shame I never got to meet Campbell, but he was clearly an amazing person," said Boylan, who is giving all proceeds from song downloads to the Injured Jockeys' Fund.

The teenager, from County Offaly, added: "I received many calls about writing a song and at first I was quite reluctant about it.

"It was a terrible, terrible thing that happened and I guess my job was to capture him as best I could. The last thing I wanted was a morbid song."

Boylan, a boy reared on the thrill and unpredictability of jump racing, is heartfelt in his poignant words after careful research.

"For all those left along the way, they will never forget that special day. When every Scotsman in the crowd, brought you home so proud, every stride a memory, a special place in history," he sings.

Campbell's ashes are scattered on the Kinrosshire gallops where he worked Brindisi Breeze before that Cheltenham win in March 2012.

Others touched by jump racing request for their ashes to be scattered at Cheltenham racecourse, on the famous uphill finish or by the winning post. A final fling in the final furlong.