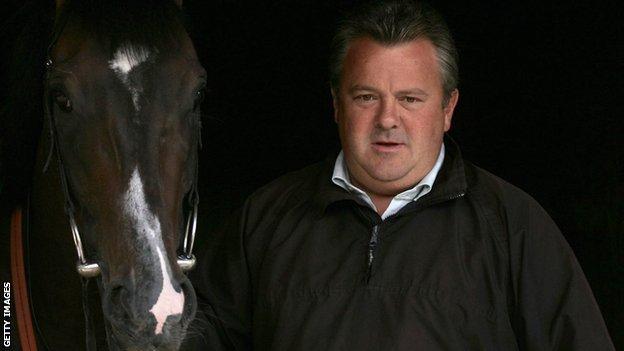 Derby-winning trainer Peter Chapple-Hyam has been fined £5,000 for misleading or attempting to mislead the British Horseracing Authority.

He admitted giving a BHA investigating officer doctored phone records, which hid the number of an associate of a person excluded from the sport.

The Newmarket-based handler appeared at a disciplinary panel hearing in London.

His records did not reveal a connection with anyone excluded from racing, which was part of the BHA's initial inquiry.

The charges could have resulted in a ban from the sport.

The disciplinary panel said it was "wholly unacceptable for forged documents" to be supplied to the BHA and said a suspension or disqualification for such an offence would only not be issued "in an exceptional case".

The BHA concluded Chapple-Hyam's attempt to conceal his contact with the excluded individual was "in part attributable" to him suffering from acute anxiety.

Chapple-Hyam won the Derby at Epsom with Dr Devious and Authorized.

Dr Devious won in 1992 before the victory of Authorized in 2007 gave jockey Frankie Dettori his first win in the big race.