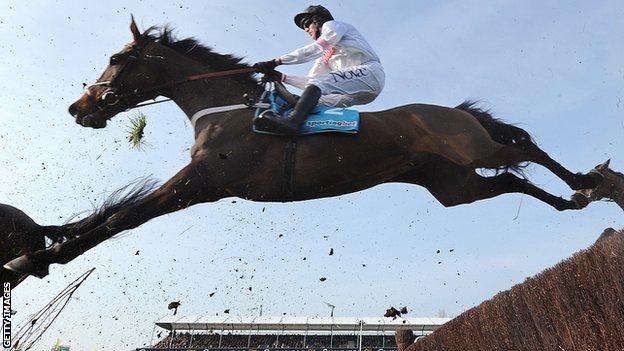 Finian's Rainbow will miss out on defending the Queen Mother Champion Chase at the Cheltenham Festival.

The Nicky Henderson-trained Finian's Rainbow was not included in the final field of seven for Wednesday's two-mile showpiece, but still has an entry in the Ryanair Chase on Thursday.

Another contender is 2011 winner Sizing Europe, who finished second in 2012.

Mail De Bievre, trained by Tom George, was supplemented for the race last week at a cost of £17,500, having run over three miles in the Aon Chase on his British debut.

Seven-year-old Sprinter Sacre, whose unbeaten run over fences includes victory in the Arkle Chase at last year's meeting, is likely to start the shortest-priced Festival favourite in living memory.

He will seek to add the two-mile Cheltenham championship to comfortable wins in the Tingle Creek and Victor Chandler Chases on his only two starts this season.

Paul Nicholls's Sanctuaire was well beaten in the Tingle Creek but will try his luck against Sprinter Sacre once again, while Somersby will represent Mick Channon.