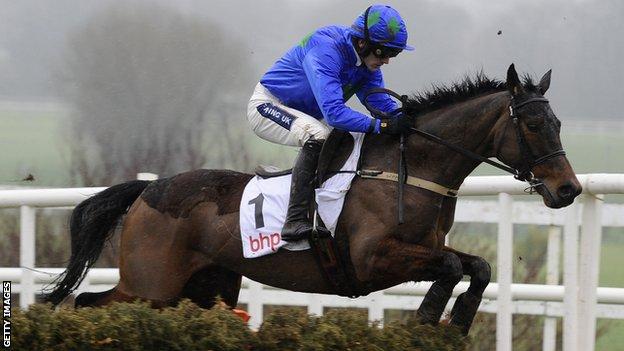 Hurricane Fly renewed his Champion Hurdle bid with victory in the Istabraq Festival Hurdle at Leopardstown.

The 2011 Champion Hurdle winner, with jockey Ruby Walsh onboard, won by seven lengths to confirm his 1-5 favouritism.

The stylish showing will be a relief to trainer Willie Mullins after the eight-year-old failed to fully impress on his reappearance at Punchestown last month.

The success now makes it 15 wins over hurdles out of 18 for Hurricane Fly, including the Champion Hurdle at Cheltenham two years ago.

Though he relinquished his title to Rock On Ruby this year, he and Walsh are expected to team up in an attempt to reclaim their crown in next year's race.

"We're delighted with that, not just with the win but by the way he settled," said Mullins.

"He was easier to lead around the ring beforehand and Ruby said he settled beautifully throughout the race.

"He's a much more settled horse all round this year, with age and racing. He will come back here for the Irish Champion Hurdle before going to Cheltenham.

"If we can get him back to Cheltenham in the same form that he's in now, he'll have a very good chance."

Bookmakers have trimmed Hurricane Fly into either favourite or a share of favouritism with Darlan for the showpiece on the opening day of the 2013 Cheltenham Festival on 12 March.