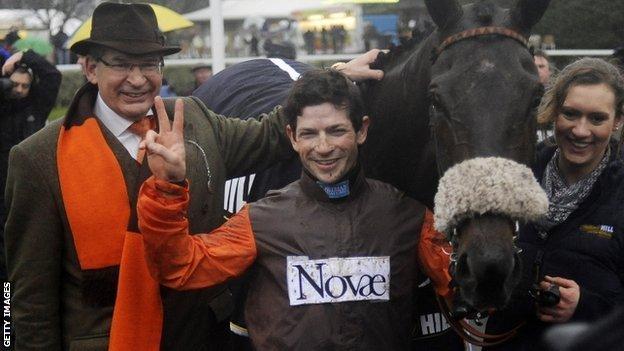 The 15-8 favourite Long Run claimed victory in a thrilling finish to the King George VI Chase at Kempton to win the race for a second time.

Amateur jockey Sam Waley-Cohen's mount made a bad mistake five out and also struggled over the final fence under pressure from Captain Chris.

The 16-1 shot, who was third last year, had come out of the pack to challenge and jumped the last strongly.

But last year's Gold Cup winner dug deep on the run-in to win by a neck.

Long Run, who had finished second to Kauto Star in last year's race after winning in 2010, had battled hard in the testing heavy conditions and three fences from home looked the most likely winner before Captain Chris and Richard Johnson challenged with Grands Crus (7-1) finishing third.

The win saw Long Run become only the seventh horse after the likes of Kauto Star and Desert Orchid to reclaim the King George title.

The seven-year-old, who is owned by the jockey's father Robert, will now be hoping to complete another King George/Gold Cup double in Cheltenham in March, but his stable-mate Bobs Worth remains at the head of the betting market at around 4-1 with Long Run at around 7-1.

The winning rider said: "He was so brave. I had to keep asking him - I asked him early and maybe I asked too much as he was tired but so brave.

"This is his fifth year of competing at this level and he means an enormous amount to us. That was racing at its best for me. I can't put it into words. It's an honour and a privilege."

Horses who have reclaimed the King George VI Chase title

He said: "It was a brave call to go on when he did and it was the right call to make. It was a battle out there today and not the best ground for any of them. He's young but has been doing everything right.

"You would have to say last year was a disappointment but he's been running good races all the time."

Johnson had a second disappointment when he was handed a nine-day ban by stewards after the race for excessive use of the whip. Johnson was also fined £900 for the offence.

Earlier, Henderson enjoyed more success when Darlan put himself in contention for the Champion Hurdle at the Cheltenham Festival with a stylish win in the Christmas Hurdle.

The five-year-old had shown some good form last year and on his seasonal reappearance he showed his style and picked up well under pressure from jockey Tony McCoy.

The 3-1 shot finished four-and-a-half lengths clear of Raya Star (8-1) with Dodging Bullet (8-1) back in third and he is now joint-favourite for the Champion Hurdle.

"He looks like a smart horse," said McCoy afterwards.

"The race was run at a slow pace and Nicky said to be aware and ride him handy. I was just keeping out of trouble and making sure he got a nice run.

Meanwhile, the David Pipe-trained Dynaste maintained his 100% record over fences with an impressive display in the Kauto Star Feltham Novices' Chase.

The six-year-old is already favourite for the RSA Chase at the Cheltenham Festival after wins on his first two starts over fences at Cheltenham and Newbury and he cemented his place at the head of the market with an impressive display.

Tom Scudamore held up the 8-13 favourite early on but he jumped into the lead four fences from home and won by nine lengths from Hadrian's Approach.