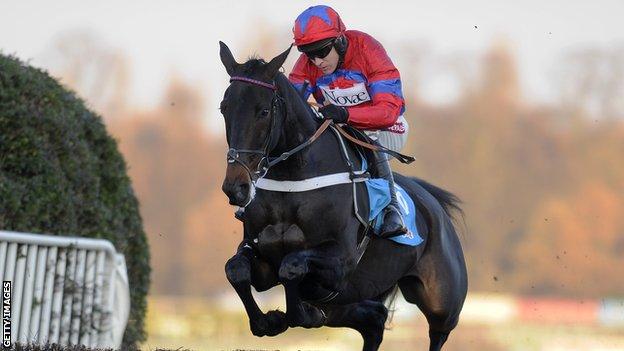 Like any sport, racing needs heroes, and with Kauto Star and Frankel both recent emigres to retirement, a gaping void was potentially forming.

However, the prospective hole seemed to snap shut via a Tingle Creek Chase performance brimming over with qualities of which both legendary warriors would be proud.

In trouncing Kumbeshwar and 'big rival' Sanctuaire, Sprinter Sacre demonstrated an abundance of power and precision that added up to an apparently effortless, simply awesome superiority.

That is the best two-mile chaser you will see. He's a bit special

Memories were evoked of Kauto Star's wide margin win in the fourth of his five King George VI Chases, of Master Minded's first Cheltenham Festival appearance, and of Frankel at Royal Ascot in June.

From before the third last of the 13 fences that make up the first of the jump racing season's three major two-mile races, it was, as jockey Barry Geraghty put it, "game over".

Frankel won the 2000 Guineas, but didn't go to the higher profile Epsom Derby and consequently, while racing insiders cooed with delight at his brilliance, it took until his four-year-old season for a wider audience to latch on.

This could also apply to Sprinter Sacre, who will not be going for the better known - longer - jumping prizes, the King George and the Cheltenham Gold Cup, at which Kauto Star put his name in lights.

The plan is for him to take in the Victor Chandler Chase at Ascot on 19 January before heading to the Queen Mother Champion Chase showpiece at the Cheltenham Festival.

However, those who market racing believe the six-year-old's thrilling style, which had the crowds lining the walkway back to the Sandown winners' enclosure, is just what's needed to quickly gain wide popular acclaim.

Trainer Nicky Henderson calls it "wow factor". Not given to excessive hyperbole, he went on: "That is the best two-mile chaser you will see. He's a bit special."

Although Henderson has no previous Tingle Creek Chase winner to his name, he was responsible for Remittance Man, a public favourite and winner of the 1992 Queen Mother Champion Chase.

"'Mittman' was a quite different horse, narrower and wiry," said Henderson, "but he was very effective at that time.

"Sprinter Sacre is the most fantastic, great big, powerful chaser, and if they were to meet I'd have to say he would probably beat Remittance Man."

As the Henderson team and owners Caroline and Raymond Mould revel in a horse for which the sky increasingly appears the limit, we probably need to spare a thought for French owner Robert Fougedoire.

In 2007, Fougedoire feared he wasn't well and decided to sell 22 horses, all unraced, as a job lot to concentrate on regaining his health.

Among them was Sprinter Sacre, then two years old and winner of a foal's prize at the prestigious Decizes show in the Loire Valley, but subsequently unconsidered.

"It transpired Bob wasn't ill," said Minton, "and it's good he's getting involved again. He'd better be guest of honour when the horse goes to Ascot and Cheltenham.

"Thirteen out of the job lot have won, so what a bargain 'Sprinter' turns out to have been. We are all very excited about the future."

They are not the only ones.