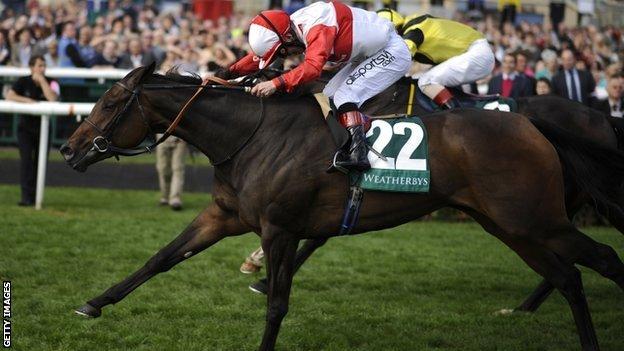 Liverpool-born jockey Franny Norton dedicated his win on favourite The Gold Cheongsam at Doncaster to the victims of the Hillsborough disaster.

A day after Liverpool fans were cleared of any blame in relation to the 1989 tragedy - in which 96 people died - Norton was close to tears.

"That victory isn't for me, it's for the Hillsborough 96," said Norton.

The fans died as a result of overcrowding at the start of the FA Cup semi-final between Liverpool and Nottingham Forest on 15 April 1989.

On day two of the St Leger meeting at Doncaster, Sir Henry Cecil's Wild Coco (7-4 favourite) followed up her win at Goodwood with a gutsy success for jockey Tom Queally in the DFS Park Hill Stakes.

In a race known as the fillies' St Leger, the Queen's Royal Ascot winner Estimate kicked three lengths clear under Paul Hanagan but faded inside the furlong and finished third behind runner-up Hazel Lavery.